MAP03: Cargo Depot is the third map of the megawad Alien Vendetta. It was designed by Mattias Berggren in the end of 1999 and constructed with DETH. It uses the music track "Kitchen Ace (and Taking Names)" from Doom. 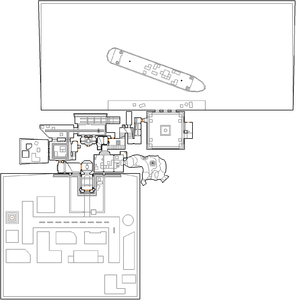 Map of Cargo Depot
Letters in italics refer to marked spots on the map. Sector numbers in boldface are secrets which count toward the end-of-level tally.

Take the super shotgun and chaingun to your sides and head into the building. Follow the halls until you reach a room with crates. Go to the stairs to the right, up the steps to a switch. This switch opens the door to the next area. There are a large number of imps here. You will find yourself next to a railway, which is your exit for later on. Since the two doors next to the entrance to the railway need the blue key, just go east and into the next room. In here, there are two sets of stairs, one leading up and one leading down. Take the set going down into another cargo room. Go around the outer bend here, climbing on the crates and dropping down to where you see a switch. Flip it to lower a nearby crate blocking access to a cavern. Behind the large number of imps is the yellow keycard. Backtrack to the other set of stairs and go up, going through the winding passage to the yellow door. Behind this door is a courtyard with revenants in the corners. Go to the back room and flip the switch to lower the blue keycard. Doing so also releases spectres into the courtyard. Grab the key and return to the blue key switch to open the adjacent doors. Behind these doors is a small room with Hell knights and a switch. This lowers the barricade blocking access to the railway. Drop to the rails and head right to leave the map.

* The vertex count without the effect of node building is 1994.