MAP03: Cave of the Lost Souls is the third level of Resurgence. It was designed by Josh Sealy (Joshy) and uses the music track "Infuscomus" from Blood. The map is a remake of Surge MAP03, and was inspired by Vulcana by Paul Corfiatis, evident by the large lava cavern in the north of the map. 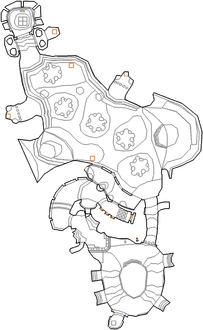 Map of Cave of the Lost Souls
Letters in italics refer to marked spots on the map. Sector, thing, and linedef numbers in boldface are secrets which count toward the end-of-level tally.

As soon as you start the level, several imps will be alerted to your presence. Run forward and pick up the shotgun, then drop down into the lava pit below and pick up the rocket launcher and the ammunition surrounding it. Watch out for the two cacodemons when you do this. Leave the pit by going up the steps ahead and collect the berserk pack. You will notice that there are two paths leading away from the starting area, the eastern one of which is blocked by some rocky columns. Head for the western path and as you come to the first pool of lava at the start of the path, look for a black marble step on the right, which you can use to get up on to a ledge with a switch. This lowers the bars, making the east path now accessible.

The path will bring you out at the top of a gigantic cavern, with lava flowing down the sides into a large pool at the bottom. You will be able to see the blue skull key on the upper right hand side here, and the yellow skull key on the lower left. Hell knights will attack you from tall rock columns through the middle of this area, and mancubi will attack from the sides. Before you proceed any further, you will need to raise a column nearer to the ledge you are currently standing on, so pick up the chaingun nearby, turn left into the small tunnel, and hit the switch at the end of it. It is advised that you also take a radiation suit, to prevent damage in the next part.

Return to the ledge, and wait for the nearest pillar to finish rising. Clear as many monsters in the area as you can, then proceed forward. Be very wary of mancubi attacking from long distance on both sides of the cave here. If you fall off the columns, there are two teleporters in the lava below that lead back up to the top of the ledge.

When you reach the other side of the cavern, you will see the red skull key in front of you. Take it and press the switch, and watch out for a revenant or two that teleports on to the marble pad in this room. The cavern will also begin to fill up with monsters. Clear as many as you can, then drop down into the lava and take a teleporter back to the tunnel at the top of the cavern. This is now a dangerous area, because the as the western path off of the start area is visible from this tunnel, and it too has filled with monsters, including an arch-vile on Hurt Me Plenty and higher skill levels. Clear the monsters on the western path, the ledge just outside the tunnel, and also those that are surrounding the blue skull.

Jump down across the rock columns again, but stop on the third column, turn right, and use straferun to jump down into the small alcove with the red torches. Take the teleporter between the torches, and you'll find yourself on the ledge with the blue skull key. From here, you can straferun again to the second column. Getting the yellow skull is the same procedure, just straferun into the alcove next to the fourth pillar instead.

Return to the top of the ledge via the teleporter in the lava, and make your way back to the start area, and go on to the western path. Follow it all the way round, clearing any monsters you need to, and open the three key doors, hitting the switches behind them. This will lower the three sets of barricades that block the exit. Enter the portal to end the level.

* The vertex count without the effect of node building is 2097.