MAP03: Crouching Demon, Hidden Archvile is the third map of Deus Vult II. It was designed by Huy Pham (Doom Marine) and uses the music track " ". The par time defined in MAPINFO is 2:00. 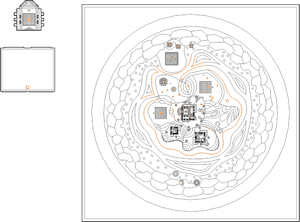 Map of Crouching Demon, Hidden Archvile
Letters in italics refer to marked spots on the map. Sector numbers in boldface are secrets which count toward the end-of-level tally.

Alternate Exit: At the base of the mountain where the water is, go to the southern end and you should spot a fire. Head to this fire, and your health will slowly drain as the area around the fire is a Type 11 damaging sector. Once it gets below 11 the level will end.

* The vertex count without the effect of node building is 6874.

In PrBoom+ automap, this level is called "Ichi, Ni, San, Shi". This refers to the signs that read "一二山四", which translates to "1, 2, mountain, 4," and reads them using their on'yomi (ichinisanshi). The "mountain" character 山 has the same on'yomi, san, as 三, or "three". The substitution is likely a pun based on the level taking place on Mt. Fuji.