MAP03: Dilapidation is the third map of Congestion 1024. It was designed by Rachel Schmitz (Negatronica). It uses a MIDI version of Almost Honest by Megadeth. 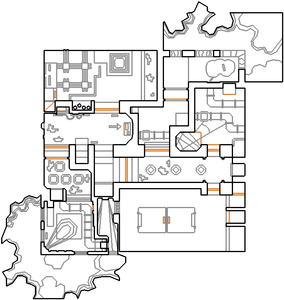 Map of Dilapidation
Letters in italics refer to marked spots on the map. Sector numbers in boldface are secrets which count toward the end-of-level tally.

When playing in a non-ZDoom-based source port, the wide lights in the gray STAR hallway (linedef 671) suffers from egregiously poor texture alignment, and the exit door (linedef 1995) has a garbled texture. These are nodebuilding errors caused by the then-current version of ZDBSP, which occasionally did not write a level's SEGS data correctly.

* The vertex count without the effect of node building is 1787.