MAP03: Doomsday Machine is the third map of the Newdoom Community Project. It was designed by Derek Braun (Dittohead). 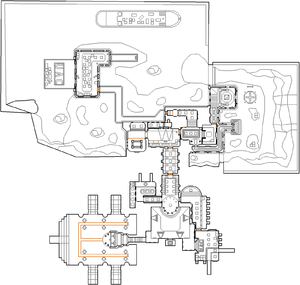 Map of Doomsday Machine
Letters in italics refer to marked spots on the map. Sector, thing, and linedef numbers in boldface are secrets which count toward the end-of-level tally.

Take the lift in the room to the right of your starting point. If you need a shotgun, press the switch and drop to the floor to enter the newly opened room to get it. On the balcony, there are two doors. The southern one is a red key door that does not have markings, so take the eastern one. There are several paths, the one immediately to your left is blocked and requires the blue key. There is also a room straight ahead and a hallway to your right. Grab the super shotgun in the room in front of you, and take the door that is to your left. In this room that overlooks a courtyard, there is a switch that you should press. Now backtrack and take the hallway, and a door should be open into the courtyard. The red key should be in the middle of a landing pad. Now backtrack to the unmarked red door. Go through the hallways behind it, until you reach a large room which bars access to an area of nukage. Two paths are available, go to your right (left on the map) and grab the chaingun and press the switch there to open the other path. Now take that path, into another door and then you will be able to access the nukage behind the barriers. Make sure to grab a radiation suit (the switch here reveals Secret #2 so if you want it make sure to hit it) and then head westward to another large nukage-filled chamber. A number of enemies on columns and on the sides reside in this chamber. Press the switch here to raise a large walkway, and then hit the two switches at the ends of both forks in the walkway. If you fall, press use the walkway to lower it as a lift. There are several radiation suits there in case you fall as well. Backtrack to the other chamber of nukage, and to the north you will be able to access the blue keycard. Now backtrack all the way to the bars requiring the blue card and use the key there to open the hall. Follow the path all the way to a crate-filled room. The switch on the west wall opens nearby doors to an outdoor crate-filled area with a spider mastermind. The two switches here open the bars to the exit.

* The vertex count without the effect of node building is 4781.