MAP03: Fortress of Moooo! is the third map of Mock 2: The Speed of Stupid. It was designed by James Haley (Quasar) and uses the music track "Best Dom Rok Snog" by Csäbö. 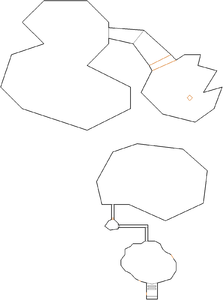 Map of Fortress of Moooo!
Letters in italics refer to marked spots on the map. Sector, thing, and linedef numbers in boldface are secrets which count toward the end-of-level tally.

Facing a wall at first, quickly turn around. A cyberdemon is seen behind a plentiful amount of powerups behind them, which includes invulnerability, megaspheres, soul spheres, berserk packs and blur artifacts. Grab the powerups, and defeat the cyberdemon with any weapon. Head to your east; go inside the tunnel seen to your left and open the big door seen inside it. With invulnerability, dash through a cluster of cyberdemons and Wolfenstein SS until you reach a teleporter located northwest.

Now in a completely different room with spiderdemons and sergeants spammed everywhere, quickly head inside a room seen to your left. Inside it lies 16 Commander Keens; kill all of them to open a door seen to your left. After getting through a short tunnel, you'll now find yourself in a maze-like room, filled with multiple impassable decorative objects. An arch-vile and a revenant are seen near both directions. There are two switches seen to the far left and far right. Kill the arch-vile and revenant during your way through them, and flick both buttons. They will open a gate, which reveals three Romero's heads; kill them with any weapon to finish the level.

An alternative way to kill the Romero's heads in the end is by a crusher, which is activated by a button seen to the left of the room. It may take a while though, as the crusher moves very slowly.

* The vertex count without the effect of node building is 106.

Due to use of the Commander Keen door-opening action, the map cannot be completed in no-monsters mode. This is by design.

"Fortress of Moooo!" was inspired by the 1994 level style of maps found in D!ZONE compilation discs, and deliberately includes several tropes lifted directly from them: