MAP03: Front Base is the third map of Strife. Hidden beneath the ruins of the old town hall in Tarnhill, it is an underground bunker and command center which serves as the initial home of the Front, the military resistance movement organized against the tyranny of the Order. It uses the music track "Danger".

After the Programmer is killed, this level is replaced with MAP30: Abandoned Front Base and MAP03 can no longer be accessed.

After completing Rowan's task in the beginning of the game, he gives you the communicator. When you first get it, BlackBird comes on and tells you about the current situation. After that, she tells you to head over to the old town hall, where the Front's base is located. She advises you to talk to the guard Geoff and tell him you need gold. You do not have to tell Geoff anything, since there is a secret switch that opens up the same door he opens when you tell him the secret.

When you enter the place, head down the hallway and you will meet Macil. He will offer you a chance to fight with the rebels. You can refuse, but if you do, he and the rebels will begin to fire at you, killing you. Until you kill the Programmer, the base is where you will get most of your objectives and missions. When the Programmer is dead, MAP30: Abandoned Front Base replaces this level as the Order's castle becomes the new base for the Front.

To the south, there is a lift that leads to the rebel barracks. There is nothing much there but some rebels hanging out. To the west is where you can shoot out at the firing range and get stamina and accuracy upgrades. 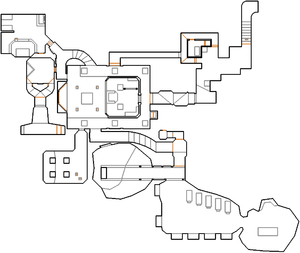 Map of Front Base
Letters in italics refer to marked spots on the map. Sector, thing, and linedef numbers in boldface are secrets.

In most cases, you will access the Front base from the stairway hidden in the town hall. To find Macil from here, head forward through the crate room to a lit corridor, then head straight forward through a doorway to find Macil stood on a raised platform in front of you.

After returning to the base from the prison, you will arrive on a teleporter hidden just east of Macil's command center.

Next to Feris is a firing range for you to practice shooting at targets. Its doors close automatically when you enter the range, but you can open them again by pressing the buttons next to the doors.

Later in the game, you will receive the silver key from a False Programmer in the castle's audience chamber. However, if you return to the base to open the silver door, you will find nothing but an empty cell. Also, when you enter the western side of the passage after destroying the castle's gate controls, a new passage will open nearby holding two medical kits. The areas have little value at the point, but when the base is later abandoned, they are worth another visit.

A rebel shirt (thing 124) in the north-west has no flags set for any of the three difficulty classes, so it does not actually appear in the level. The player 1 start (thing 0) and teleport map spot 1 (thing 1) have no skill flags set either, but because of special handling in the engine, they function normally in the level.

* The vertex count without the effect of node building is 729.