MAP03: Gythop's Pyramids is the third map of Avactor. It was designed by Eradrop and uses the music track "". The par time defined in the DEHACKED lump is 26:00. 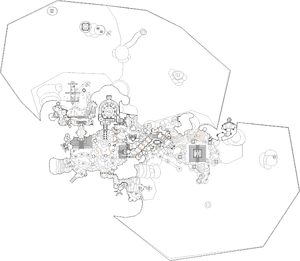 Map of Gythop's Pyramids
Letters in italics refer to marked spots on the map. Sector, thing, and linedef numbers in boldface are secrets which count toward the end-of-level tally.

From the starting ship, proceed up the steps to a large jungle space with several pyramids. Head north to the vault-like structure and enter. Follow the left path around to the skull switch, and press it to reveal the red skull key. Collect the key and continue up the left path to an optional red skull switch which opens a nearby building with a mega armor. Back in the jungle, use the red skull to enter the red-fire pyramid and ride the lift down to the sunken hallway.

When you run across the lava pit, bars will rise to stop you. Facing back the way you came, shoot the bull switch on the left to raise a platform on the right. Use the platform to reach the right side and press a switch to remove the lava. Collecting the optional berserk pack will drop you into a small ambush; jumping into the water will trigger another, larger ambush. Proceed up the stairs to the shoreline, continue north past the red teleporter, and drop in the window of the sunken hall. A switch opens a connection to the previous hall. Across the walkway, the path leads to a large outdoor area with a temple.

Travel to the left around the temple and up the stairs to the top. Enter, grabbing the plasma gun and fighting off the ambush. Shoot the skull switches to escape, then head back to the sunken hallway. The walkway will fall, dropping you in the first hall north of the bars. Approaching them will lower them. At the other end of the hall, a dark stairway silently warps you back to the jungle area near the blue skull key. Pressing the skull switch will lower the column; collecting the skull key will block the stairs and trigger an ambush. Press the skull switch in the monster alcove to remove the bars and climb the blue-fire pyramid.

Inside, cross the room and activate the far door, dodge the crushing ceiling, handle the ambush, press the skull switch back at the entrance door, then travel through the finally-open far door. Reaching a cove on the far side of the island, your exit ship awaits; activate the skull switch halfway down the stairs to access the dock and escape.

* The vertex count without the effect of node building is 17803.