MAP03: Hazard Storage is the third map of Simplicity. It was designed by Melissa McGee (Agent Spork) and uses the music track "The Demons From Adrian's Pen", originally created by Robert Prince for Doom. The par time defined in MAPINFO is 3:30. 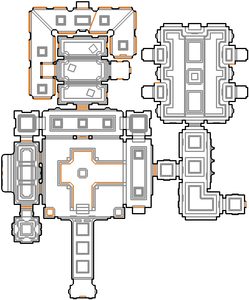 Map of Hazard Storage
Letters in italics refer to marked spots on the map. Sector, thing, and linedef numbers in boldface are secrets which count toward the end-of-level tally.

Open the door and kill the zombiemen ahead (joined by imps on Hurt Me Plenty (HMP) skill level, and shotgun guys on Ultra-Violence and Nightmare), then take the shotgun by the west wall and press the button next to it - this will open a split door to the north and cause two demons to appear behind you, as well as allowing various enemies to teleport in through the door. Go through the door and turn right to dispose of more zombiemen, shotgun guys, imps and cacodemons on the walkways ahead, then follow the walkways east and south to a UAC door in the east wall. Open this door to enter a blue hallway and kill the small enemies waiting behind it, then follow the hallway south to another button; after pressing it, head north past some demons, imps and shotgun guys that teleport in to a hall with more of the same enemies.

Inside this hall are two more buttons in the north-east and south-west alcoves - the first button will cause imps, shotgun guys and zombiemen to teleport in, and the second button will bring in imps and demons along with zombies and Hell knights. Kill everything then take the blue keycard that is revealed by the north wall, then go back to the nukage area (more imps have appeared on the walkways) and open the locked door on the north side to enter a storage room where imps (and cacodemons on HMP or higher) are guarding a super shotgun. Look east to see one or two chaingunners guarding a switch and pull it to raise a lift on the west side of the room, then activate this lift and ride it up to a corridor with some waiting chaingunners and imps. Follow the corridor north and east to find a knight guarding another switch (more knights and some shotgun guys will also spawn by the lift), flip it then enter the blue teleporter that opens behind you to get back to the nukage area.

Cacodemons will spawn above the nukage, and you will also have to contend with shotgun guys and chaingunners that appear on the surrounding walkways. Go down to the bottom level and enter another blue teleporter that has opened to be sent to a button on a small platform, press it then step off the platform to teleport to a second button; the second button will open the nearby metal bars and allow you to enter a sewer tunnel. Enter this tunnel and press the switch at the end to finish the level.

A chaingun can be found on the walkway in the middle of the nukage pit.

* The vertex count without the effect of node building is 2070.

This level contains the following numbers of things per skill level, not including enemies that are spawned via Thing_Spawn or similar functions: