MAP03: Hone Gumi is the third map of Combat Shock 2. It was designed by Daniel Jakobsson (dannebubinga) and uses the music track "Stigmatism", originally composed by John Weekley (PRIMEVAL) for Reverie. 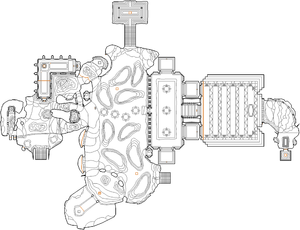 Map of Hone Gumi
Letters in italics refer to marked spots on the map. Sector, thing, and linedef numbers in boldface are secrets which count toward the end-of-level tally.

Your goal in this level is to find six keys to access the final arena. There are three locations to visit, each containing the two keys (keycard and skull key) of the same color.

Leave the starting hallway into an overgrown area. Head to the north-east corner of this area, past the brown building, to reach a pool of water. Inside you will find the blue keys, defended by a squad of revenants.

Head back from the pool, then make your way to the east of the overgrown area, onto a ledge that overlooks a vast lake occupying the middle of the map. Head south along the ledge, into a smaller cavern where you will find the red keys (but this will unleash a cyberdemon).

Drop down into the huge lake, and head to its northern end. Head through the tunnel into a small room where the yellow keys await, guarded by an arch-vile (or a revenant, on easy difficulty) and some heavy weapon dudes.

Enter one of the teleporters in the lake to get back up on the ledge, right next to the skull switch that requires all six keys. Turn this switch on to raise several platforms leading across the lake. Leaping from platform to platform, make your way to a large rectangular room.

Trip the breaker switch in the eastern part of the room. This will open four additional closets, each packed with monsters and containing a switch. Trip all four switches. This will open a door to the east, leading to the final arena and a grand battle. Press the switch to the east to lower the bars, then head down the passage behind the bars to reach the exit door.

In the starting area on the western side of the map, there is an L-shaped brown building to the north. There are several goodies inside, including a rocket launcher, but you will have to fight for them. As soon as you enter the building, the door will lock behind you. If you want to open it, you have to press the switch at the end of the hallway, then pick up the rocket launcher that lowers behind you. After defeating the unleashed monsters, head back to the switch to find a newly-opened closet, with a skull switch inside that will open the exit door.

The data was last verified in its entirety on September 26, 2022.

* The vertex count without the effect of node building is 9741.