MAP03: Inter-Base is the third level of Eternal Doom and was designed by Dietmar Westerteicher. You start off in a glass corridor and enter an underground base. 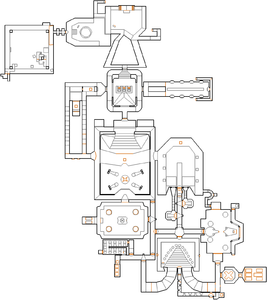 Map of Inter-Base
Letters in italics refer to marked spots on the map. Sector numbers in boldface are secrets which count toward the end-of-level tally.

You can get the rocket launcher and chaingun on this level. To find the exit, complete each of the skull key areas - red, blue and yellow - and then backtrack to the blue key area. The mysterious tiled wall that would not open before is now gone. Enter the large area revealed and activate the devil-face switch.

-When you see the yellow keycard on a raised platform, there is a switch you must flip on the back side of that platform.

-You'll come to a hall with two blue torches to your right at the end of the hall. Press the wall between the torches. Then turn around and press the switch that is revealed. Finally, when the lift raises up, look for a switch through a window and shoot it. This opens a required teleporter up elsewhere in the level.

-Behind the blue door there are two switches, one on each side of a raised platform. Continue flipping both until the bottom of that raised platform is completely flat with blue in the center.

-To get the red keycard, jump into the teleporter in the center of the slime pit (don't miss the jump!). Then jump through a side window to the side of the room with the red keycard.

-In the room with the skullkeys, you must pick up all three (one at a time), but may do so in any order. After you pick up each skull, you can lower the bars of the matching color.

* The vertex count without the effect of node building is 2377.