MAP03: Interlock is the third map of Memento Mori. It was designed by Tom Mustaine, and uses the music track "DLA" by Mark Klem. 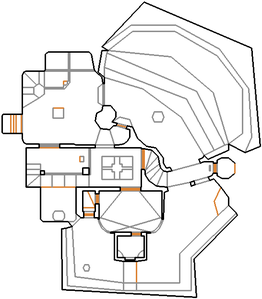 Map of Interlock
Letters in italics refer to marked spots on the map. Sector numbers in boldface are secrets which count toward the end-of-level tally.

Open the door in front of you, as well as the northern door in the next room. Go down the staircase, and press the switch. Go up the stairway in the following room and grab the blue key. Head back up the stairway, and open the blue door to the east. Grab the red key at the end of the passage, and return to the start of the level. Open the red door to the west, and take the lift down. Open the door, head outside, and grab the yellow key at the east. Wait until the northern wall lowers, and then enter the passage again. Open the yellow door, and flip the switch.

The super shotgun, the rocket launcher, the plasma gun and the BFG9000 are only accessible in deathmatch mode (or by using the idclip cheat), but are not flagged as multiplayer only.