MAP03: Iron Mike is the third map of Doom 2 Unleashed. It was designed by Brian Knox (Snakes) and uses the music track "Kitchen Ace (And Taking Names)" by Robert Prince.

When using the music WAD included with this megawad, this level instead uses the music track "Adrenaline Overdose" by Paul Corfiatis. 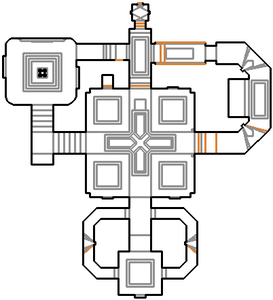 Map of Iron Mike
Letters in italics refer to marked spots on the map. Sector, thing, and linedef numbers in boldface are secrets which count toward the end-of-level tally.

Take the berserk pack in front of you then follow either tunnel to the left or right, killing a zombieman and an imp blocking the way. When you exit the tunnel, step north into a room with nukage then turn left and climb a set of blue steps ahead of you to the top. Enter the passage in the north-east corner and kill the spectre and imp blocking the way, then press the switch by the window. Kill the demons and spectres which teleport in behind you, then go back down the stairs and collect the blue keycard which has been revealed on the way.

Go back to the nukage room and open the east door which has blue key markings, then lower the lift behind it and kill the waiting revenant. Ride the lift up to a passage and follow it round to a red keycard, killing any zombiemen and imps blocking the way as you go. Backtrack to the nukage room, killing some more imps and zombiemen that have been revealed on the way, then open the north door to confront three monsters - one Hell knight and two demons on Hurt Me Plenty (HMP) skill level or lower, or three knights on Ultra-Violence (UV) and Nightmare (NM). Once these monsters are dead, open the exit door to confront one more monster - a spectre on I'm Too Young To Die (ITYTD) and Hey Not Too Rough (HNTR), a revenant on HMP or an arch-vile on UV and NM. Kill the monster then press the switch behind it to finish the level.

The corridor north of the start point holds an armor pickup on HMP, and a shotgun on HMP or lower.

* The vertex count without the effect of node building is 549.