MAP03: Lava Annex is the third map of Hacx. It was designed by Marc Pullen (Fanatic). 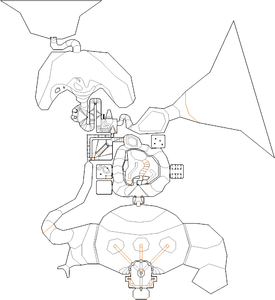 Map of Lava Annex
Letters in italics refer to marked spots on the map. Sector, thing, and linedef numbers in boldface are secrets which count toward the end-of-level tally.

Turn left and enter the tunnel in front of you, which you can follow to a pair of metal bars that will open as you approach. Continue round the next bend and destroy one or more approaching androids, then go down the steps behind them to a water pool with thugs and press the metal wall in the south-east corner to lower it. Go round the next corner to enter a hallway with a valise, but approach it with caution as more androids will teleport behind you (and in front of you on "Let's rip them apart!" skill level or higher). Fight your way through to find a cenotrophexine, then go round the next corner to ride a lift down to a square room with some thugs and one or more buzzers; take the 007Microtel by the lift if you need more health. Once the area is clear, press the metal wall just north-east of the lift to reveal some stairs leading up to the KeyCard as well as a cryogun.

Climbing the stairs will release more androids into the room - destroy them then open the metal wall in the north-east corner of the room (requiring the KeyCard) and go down to a round cavern. There are two tunnels leading east and south that contain mutants and thugs; follow either tunnel, passing some rooms that contain more of the same enemies, until you encounter some buzzers then go through the north doorway and follow the passage to a lava cave with one to three monstructs guarding the password. Kill the monstructs then walk along the bridge until you reach their ledge, which will raise some stairs behind you leading up to a switch that will further raise one of the steps. Run across this step to get to the password.

To get out of the cavern, flip the switch on the north wall to raise a bridge on the west side of the cave which you can follow to secret #3, then flip a second switch in this secret to raise a bridge on the east side of the cave that leads to a cenotrophexine - the south wall of the alcove will lower and allow you to get back to where you confronted the buzzers. Open the south metal wall (requiring the password) to confront some androids guarding a lift, which you can ride down to a massive cavern with three lava spouts, then head past the spouts to a silver structure and go to its east side of this structure to find another cenotrophexine next to a metal lift. Ride the lift up to a chamber with androids and thugs, clear them out then go up either staircase in the south corners to get on the thugs' walkway, which will lower a column in the middle of the walkway to reveal a broken panel.

Shoot the panel to reveal a switch and pull it to trigger an explosion on the other side of the wall, then go back down to the floor below and step through the metal doorway on the west side to go down to a ledge with some Vulcan rubber boots. The floor of the cavern has changed to lava, so collect the rubber boots then head west to an opening in a lava-fall that has a tunnel behind it. Follow the tunnel north to a metal lift and activate it to get back to the hallway that had the valise, proceed north and east to return to the room with the water pool then pass through a doorway that has opened in the east wall to find a staircase leading up to some metal bars. Flip the switch next to the bars to open them, then run north-east until you drop off a ledge and end the level.

There are four rooms branching off the staircases surrounding the central lava cave - search them to find various items including light amplifier goggles, a cenotrophexine and a body armor.