Unchecked
This level occupies the map slot MAP03. For other maps which occupy this slot, see Category:MAP03.

MAP03: Main Engineering is the third level of Doom 64 TC. The level is relatively small, consisting of only four small rooms where you need to activate teleporters or press switches to receive keys. The music for this level is distant crashing metallic sounds along with haunting orchestral music. The level also introduces Cacodemons, Lost Souls and a brand new enemy exclusive to Doom 64: the Nightmare Imp. This level is unique in that two of the rooms' structures end up changing either moderately (the center room with the blue key) or dramatically (the second to last room, where the player finds the switch which gives him access to the red key). 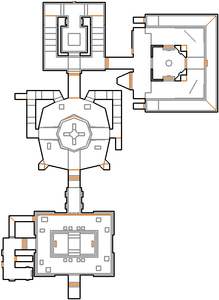 Kill the Zombieman in front of you and press the switch to open the doors at both sides of you. The surrounding floor contains several Nightmare imps. Pass the door in the middle and enter the room carefully. Wait until the central podest built up and walls to your sides opened - revealing more normal and nightmare imps. Get the blue key on top of the podest. Some ammo clips and stimpacks are available in the teleporter corners.

Pass the blue door, face several Nightmare imps and Cacodemons, and activate at least either one of the teleporters in the corners of the central building by pressing switches in its side walls. You will appear on the upper railing where you can find stimpacks in the corners. Getting them opens closets at the ends with a stimpack and a box of shotgun shells, or a box of ammo on the other side. A switch in the center appears with more ammo in front of; as if you would need it. Pressing the switch opens the central room and releases more Cacodemons and Lost souls. The yellow key is contained inside, a bridge appears after cleaning the room from all monsters — in contrast to Doom 64 EX where a lift gets available. You may return to the starting point to find a Backpack there.

Return to the podest where the blue key was kept (more normal and nightmare imps await you) and pass the yellow door straight up, taking a Chaingun and a Box of bullets. More Nightmare imps welcome you in the entrance where you obviously need to press a switch, trying to get to rows of Health boni and Armor boni. The ceiling lowers and appears to crush a bassin into the floor. A step forward, and Imps and Lost souls appear.

After finishing them off, descend into the bassin. The right switch briefly opens a niche with Stimpacks and Boxes of rockets opposite to the entrance. Pressing the left switch has no obvious result yet. Return to the previous room and find the red key on the podest. Enter the corridor behind the red door to find more Nightmare imps and the Exit switch.