MAP03: Microwaved Uterogestation is the third map of 32in24-5, a deathmatch megawad. It was designed by Shaikoten, detailed by mid, and uses the music track "".

It was the first of eight initial layouts submitted by Shaikoten, and the first layout of the session overall, arriving only 28 minutes after the start time. 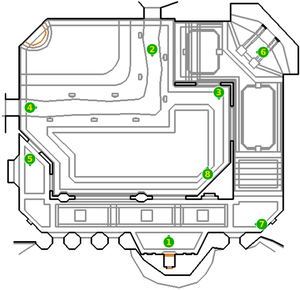 Map of Microwaved Uterogestation, cropped to only show the playable area 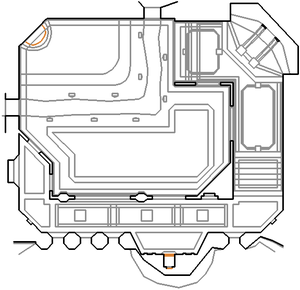 Map of Microwaved Uterogestation, cropped to only show the playable area

Microwaved Uterogestation is a small and gloomy looking map, similar to the two maps that precede it. The playable map area is a small oblong, with views of inaccessible areas that provide a sense of location to the map. The south and eastern borders of the map are occupied by a small building. In the buildings west corner, players can find a rocket launcher. Along the southern wall is what appears to be an exit switch, but this is in fact a door that can be opened to reveal a small compartment containing a chainsaw and the true exit switch. On the eastern wall, the building continues up a staircase, and around the north-east corner, where players can jump to a separate balcony outside covering the north-west corner of the map area, which holds eight rockets, and a plasma gun.

The rest of the map is the ground level part of the outdoor area. Between the gap between the building and the plasma gun balcony is a small river that runs from the north wall of the map area to the centre and then around to the west. Where it enters from the north, players can find a green armor. An ammo supply can be found in the south of the outdoor area, near the south-west building entrance. It consists of two boxes of shells and a box of bullets.