MAP03: Mr.Adolf Kill You! is the third level of Kama Sutra. It was designed by Adolf Vojta and uses the music track "Between Levels" from Doom II.

Another one old small map I like. I included one special secret place as a little joke :) 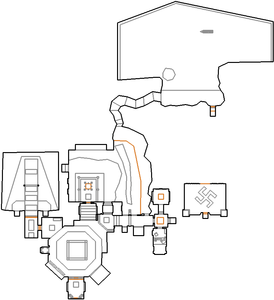 Map of Mr.Adolf Kill You!
Letters in italics refer to marked spots on the map. Sector, thing, and linedef numbers in boldface are secrets which count toward the end-of-level tally.

There are some enemies on a platform in front of you at the start. You can kill them using the rocket launcher that is to your left. You can also see the blue key on the platform, but you can't reach it right now. Near the rocket launcher is the first door you have to open. The area ahead looks rather safe, but when you grab the berserk pack, you'll trigger two traps (one ahead of you, one behind you), so it's better to go back to the start immediately. Once you've killed the enemies, you're free to grab the yellow key (just be careful of two zombies inside of windows behind you). Back into the starting room take the stairs across from the door you've used. Note: if you try to grab the super shotgun, several traps will open up at the same time, so be careful when you grab it. Exit the base and go outside (if you step out of the shore into the nukage pit, you'll trigger another trap). Find an opening and follow the new passage way until you come across several enemies. Use the chaingun against them. Open the yellow door, take the teleport and you'll be on the platform of the starting room. Grab the blue key up there, flip the blue switch in the southern room (but be careful of a little trap!) to rise up the bars to the exit teleport.

* The vertex count without the effect of node building is 1095.