MAP03: Napoleon Complex is the third map of 32 in 24, a deathmatch megawad. It was designed by crisandwitch, and uses the music track " ".

This was the fifth submission to the project, built in just under an hour, according to the author, and submitted to the project thread about two and a half hours after the start time. Originally, every item in the map was flagged to not appear in deathmatch, much to the irritation of Dean Joseph (deathz0r), who noticed the error whilst compiling the main WAD, and fixed it. 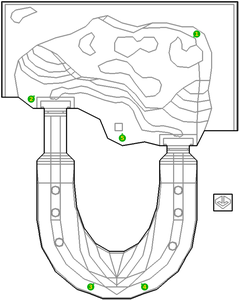 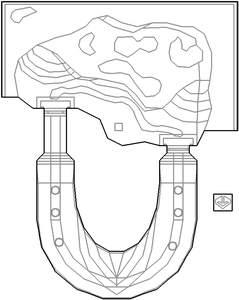 Napoleon Complex is a small and brightly lit map, divided into two areas. In the north of the map is the outdoor area, which itself is divided into an upper tier and lower tier. The upper tier has the rocket launcher, a single rocket for it, and five health bonuses, the lower tier has the super shotgun, six armor bonuses, some shotgun shells, and the shotgun, which can be found next to the west entrance to the building.

The building makes up the remainder of the map. It is a horseshoe-shaped tunnel, with blue carpet on the west side, and red carpet on the east. The colours change at the bend in the tunnel - the southernmost part of the map - where you can also find the plasma gun, and a medikit. A BFG9000 is present in the map, but is located on top of the rocky perimeter in the north-west corner, thus making it inaccessible.

Ammo is fairly scarce in the map, limited to only a handful of the smaller ammo variants for the shotgun and rocket launcher, and there is no ammo at all for the plasma gun. Some health is provided, but no armor beyond the six armor bonuses, and no power-ups.

* The vertex count without the effect of node building is 586.