MAP03: Operation Rescue is the third level of Harmony. It was designed by Thomas van der Velden (t.v.) and uses the music track "Untitled" by Kyū. The par time defined in MAPINFO is 5:45. 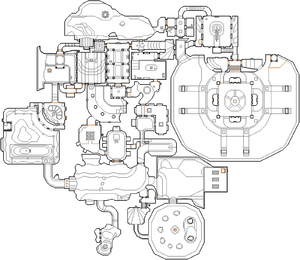 Map of Operation Rescue
Letters in italics refer to marked spots on the map. Sector, thing, and linedef numbers in boldface are secrets which count toward the end-of-level tally.

The follower is facing away from you. Attack it will cause up to two more to drop down.

You will also be introduced to floor mines. Shoot them, and they will explode. They will not react to enemies, only you. Proceed through the tunnel, to reach a small canyon. Jump down, head to the right, fight the enemies, and flip the switch to open the bars blocking the north. Proceed past these open bars, and fight the two Hunters and Phage. Collect the green key.

Return to the canyon, and approach the north wall. Open the green key door, and enter. Defeat the creatures and flip the switch on the far end of the room, opening an alcove to the west. You may now get the minigun from the lift. Proceed north east, and into the room to the north. Take the north east exit, and follow the corridor to reach the yellow key. If you decide to go through the wall on the east, you will go through an arena, where you fight a gauntlet of Phages and other enemies.

With the yellow key, head west from the chapel room. After jumping down, open the door on the right to head outside to the west. Stand on the floor switch to lower the bridge, and head to the second canyon. This leads to a small prison; flip the switch on the south to unlock the western portion of the map.

Head to the south-west part of the map. First is the main control room, which overlooks a sub. Exit, and head to the alternate control room to the west, and flip the switch to lower the purple key. Use this key to unlock the south-east door in the canyon.

Once you are past the final locked door, you should come across a small arena of Phages. step on the center floor button and head north. The exit is the ladder into the floor.

* The vertex count without the effect of node building is 4522.