MAP03: Poison Processing is the third map of Requiem. It was designed by Iikka Keränen, and uses the music track "Breath of Sin" by David "Tolwyn" Shaw. It is notable for containing simulated swinging doors at one point in the level. It is divided into three distinct areas: a snow outdoor area near the beginning, a series of nukage filled sewers in the middle, and a complex of brick tunnels near the end. 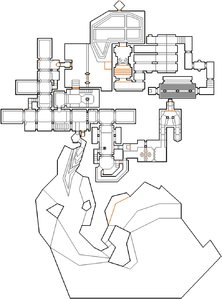 Map of Poison Processing
Letters in italics refer to marked spots on the map. Sector, thing, and linedef numbers in boldface are secrets which count toward the end-of-level tally.

As a rule of thumb, any fluid you see on this level, be it water, slime or lava, is damaging. Stay on dry land for as much as possible.

You begin in a large, snowy valley. Kill the shotgun guys ahead of you and on the platform above to your left, as well as imps on the platform to your right. Head into the "tunnel" between in the rock face, where there are two (Hey, not too rough and below), three (Hurt me plenty) or five (Ultra-Violence and above) demons. This leads you into another part of the valley, with more imps and shotgun guys. Collect the armor in the middle, then detour to the tunnel on the right side for a chainsaw, if you don't have one yet.

Ahead, the valley floor begins to drop into another narrow path. Proceed forward, being wary of some lost souls on a concealed ledge to your back. Deal with the lost soul (Hey, not too rough and below), two lost souls (Hurt me plenty) or cacodemon (Ultra-Violence and above) in front of the narrow path. Follow the path into a small pool of water, with up to two imps - try to kill them outside of the pool.

In the north wall of the pool is a small niche. Equip the chainsaw and step into it for a long drop and a difficult fight.

Once you drop in, you immediately face a tough fight. Up to five zombiemen surround you with your back against the wall, and you might get spotted by up to two imps, a shotgun guy and a chaingunner. Some demons at the far end of this room might spot you too. Kill the zombiemen with the chainsaw, then switch to the shotgun and blast away at anything coming from the stairs to the left. Remember to collect the chaingun from the dead chaingunner - it will help a lot later.

Once done, head up the stairs to the west. Take out the imps on the raised area in the north, and dispose of any remaining demons at the far end. At the far end, look north for a small staircase in the wall and follow it up, killing up to two shotgun guys along the way.

You are now on the raised area where the imps were. Run north to draw out the enemies, then quickly run back to take out some demons and a shotgun guy. Move to the north again and face a platform on the right, with up to three demons, a chaingunner and a sergeant. Once the coast is clear, find the alcove opposite the shorter slime waterfall. Enter it and use the wall ahead. It is an elevator that will ride you up to the platform where the enemies were. Once on the platform, flip the switch.

The switch will raise the floor under you. At the top, beware of up to two shotgun guys. Kill them and proceed through the door ahead.

You enter a large room with a wooden fence. Shoot out the shotgun guy ahead. As you move in, immediately turn around to engage two lost souls (Hey, not too rough and below), a lost soul and a cacodemon (Hurt me plenty), or two cacodemons (Ultra-Violence and above). Next, peek through the bars in the fence and kill any demons you see. Then, move to the door in the south of the room.

This door opens up to a brighter room with a slime waterfall. Kill the shotgun guy ahead. On Hurt me plenty and above, quickly step into the slime and out to bait out an imp and up to two spectres. Proceed up the stairs, killing any shotgun guys along the way, and follow the pathway around to get the blue keycard.

Warning: If you wish/need to take the medikit sitting in the alcove in the southwest, approach it carefully until it is collected. The medikit conceals a drop back into the earlier poison-filled areas, and a teleport trap has deployed up to nine imps in that area. Needless to say, they will get the jump on you in an area full of damaging floors, making for a very unpleasant encounter.

Once the blue keycard is collected, retrace your steps through the door in the large room and flip the switch ahead. This will re-lower the "lift" you used to come up to this area, allowing you to drop back down.

Retrace your steps to the "pool of water" that you landed in when first entering this area. As you are moving from higher to lower ground, you have the advantage against the imps that have teleported in. On the south wall of this area is a door flanked by blue light beams. Open it, then flip the switch inside. This lowers the bars at the east end of this area, allowing you to proceed. Equip the shotgun and move on.

Use the shotgun to kill up to two imps ahead. Turn right, switch to the chaingun and use it to snipe any shotgun guys you see in the distance. Once you drop down, you will be set upon by up to eight zombiemen from both sides, which the chaingun should make short work of. Moving past the "pipe" spraying out slime, you will alert a shotgun guy on the left and an imp (Hey, not too rough and below) or a spectre (Hurt me plenty and above) on the right.

Drop down into the southernmost slime pool, and kill the shotgun guy in an alcove on the right. Climb the stairs up to the platform and flip the satyr-faced switch. Drop back down and go into the alcove where the shotgun guy was, which is a pair of stairs that will take you back up.

Opposite the top of the stairs, a new area will have opened. Go through, kill the imp ahead and use the elevated platform as a safe position to shoot down all the former humans and spectres in the room. Drop down and head to the northeast of the room, where the slime has turned into blood. Drop down, kill the shotgun guy ahead, then lay waste to the two (Hey, not too rough or below), four (Hurt me plenty) or five (Ultra-Violence and above) imps in this new area.

As you approach the glittering panels in the north, a teleport trap will be activated. Imps will begin pouring out - four on Hey, not too rough and below, seven on Hurt me plenty, ten on Ultra-Violence. The chaingun should trivialise this trap, since they all come out from the same spot and go down quickly. Once you count the required number of dead imps, walk through the panels.

You are teleported to a new room with an arched ceiling. Try to kill as many imps as you can from the alcove that you are currently in. Once done, step out and immediately face left to mow down a "firing squad" of former humans in the north of the room.

The next series of corridors, while dark, contain a series of rather unremarkable encounters, with the toughest being one with a cacodemon. Follow the corridors around to a large, lit room with shotgun guys. Lost souls will proceed to attack you from below as well. Drop off from the platform, and head to the southern-most alcove. It leads to another corridor with lost souls and/or cacodemons, depending on difficulty level.

Continue forward, and a pair of double doors will "swing open", revealing a cacodemon (Hey, not too rough and below), or two cacodemons (Hurt me plenty and above). Kill them and proceed towards the exit, but if you are playing on Ultra-Violence and above, as soon as you step off the brick floor, immediately turn around - a cacodemon will teleport in behind you.

In this final large room, the exit is in sight. Beware of an imp and a demon (Hey, not too rough and lower) or two imps and a spectre (Hurt me plenty and higher) waiting in ambush in this large room. If your health is low, head to the lift in the southwest of the room and ride it up for a berserk pack.

Head to the exit. The exit room has a demon (Hey, not too rough and lower), a spectre (Hurt me plenty), or two spectres (Ultra-Violence and above). Kill them and press the switch to end the level.

* The vertex count without the effect of node building is 1641.

In the brick area after being teleported from the sewers, a number of ceilings are constructed like upside-down staircases whose linedefs are missing upper textures, notably in the large rectangular room and in the top corners of the multiple metal archways. This is an exploitation of the Doom engine's flood-fill algorithm for drawing flats. When the player looks at one of these untextured linedefs, the engine flood-fills the untextured areas with the nearest ceiling texture, making the step-like construction of the ceiling look more like a slope. This gives the illusion of an arched ceiling in the large rectangular room and metal supports with angled surfaces.

The pair of swinging doors in this level is simulated via a clever stop-motion setup.

However, each of sectors 6, 7, 8 and 9 also has a part that is outside the level, all of which are adjacent to a control sector (sector 10) with ceiling and floor at height of 32. However, since sectors 6, 7, 8 and 9 have floor height 160, the effect of triggering the corresponding linedef with type 91 is to cause each sector's floor to lower to height 32 instantly. This height also is the height of the floor in the area behind the doors.

To complete the setup, the area with the steps in front of the door has been made free of enemies. Thus, the player is likely to be walking or running directly towards the "doors" (instead of being busy dodging enemies). The result is that the player crosses linedefs 21, 24, 27 and 30 sequentially at speed, and sectors 6, 7, 8 and 9 correspondingly disappear into the floor one after the other, making it seem like the two wooden doors have swung open.

In a post written to his blog on November 6, 2007, Derek MacDonald (Afterglow) named this map one of his favorite user levels.[1]