MAP03: Poison Sewers is the third map of Whispers of Satan. It was designed by Paul Corfiatis, who also wrote the music track for this level, "Base Stalker". 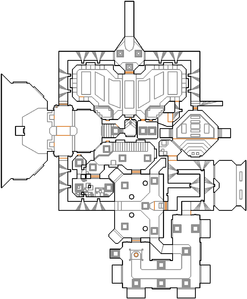 Map of Poison Sewers
Letters in italics refer to marked spots on the map. Sector, thing, and linedef numbers in boldface are secrets which count toward the end-of-level tally.

Kill the monsters across the gap and drop in to the right, being sure to pick up a radiation suit as you go. Follow this nukage tunnel to the next big room. The northern door can be opened, so take it. In the next room you need to raise a staircase, so head around to the left and open the next door to reach a crate room. Clamber over the crates your immediate right upon entering this room, and head north to the switch. After hitting it, head back into the previous room to see the staircase being raised. Hit the switch here, and then go back to the room at the end of the sewer tunnel to find the other door is now open. Head through this room to the lift, and then ride it up. Follow this simple path until you reach the yellow keycard. When you grab it, closets with imps open up to the sides. Go all the way back to the beginning and take the northern sewer passage this time, opening the bars with the yellow key. Follow this passage all the way to the end where the chaingun is and open the door. Just grab the red keycard here and then backtrack to midpoint of the sewer path where you passed by the red door. Now open this door into a symmetrical room. There are two paths that lead up, but the one on your right does not have a bridge, so take the left one, up the steps to the switch. This raises a bridge for the other path, so take that one up to another switch. Hit this one, and then go all the way back to the beginning of the level. You will find that you have raised a bridge leading to the exit, so get out of the sewer by using the lift and cross the bridge, then press the switch to open the door to exit.

* The vertex count without the effect of node building is 1964.