MAP03: Power Control is the third map of TNT: Evilution. It was designed mostly by Robin Patenall, with one fifth of the level designed by John Minadeo, and uses the music track "Message For The Archvile" from Doom II. 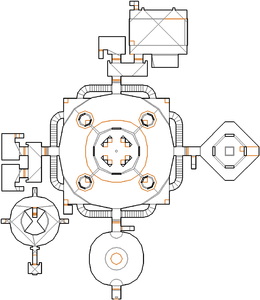 Map of Power Control
Letters in italics refer to marked spots on the map. Sector, thing, and linedef numbers in boldface are secrets which count toward the end-of-level tally.

Open the door, and go around to the northern switch. Press it to reveal a teleporter; use it, and open the next door. Open the north-east door, climb up any of the staircases, and take the teleporters at either location. Grab the red keycard, go into either the northern-most teleporter in the north-west, or the eastern-most one in the north-east, and go down the stairs to the red door north of the nexus. Open it and go through the north-east door. Flip the nearby switch to raise a bridge, and cross it to get to the yellow keycard. Go back to the nexus and make your way to the yellow door in the east. Rush in, grab the blue keycard, and head to the blue door south of the nexus. Open it, go through the door at the south of the next room, and hit the switch.

The teleporter into the tower at the north-west of the central yard, as well as the teleporter in the pit within the yellow key room, will leave you facing the wall. This is because the teleport destination things (things 7 and 34, respectively) have an angle of 0, which will make them face east, and is the default angle at which things are placed in many level editors. Presumably, whichever one of the two authors placed the things did not remember to change their angles after placing them; the destination things within the rest of the towers in the central yard have their angles set properly (facing outward from the teleport pads).

An area of the map only accessible in cooperative play contains a plasma gun not marked as multiplayer only. Since weapon pick ups do not count toward the item tally on the intermission, this does not prevent players getting 100% items.