MAP03: Quarry is the third level of Icarus: Alien Vanguard, set in a quarry on Beta Pictoris 3. It was designed by Ty Halderman and uses the music track "Hell" by Jeremy Doyle. 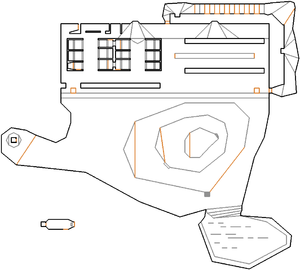 To get the red key, head all the way west from the start, and then north to a chaingunner guarding a switch. Pressing this switch will release several cages with imps inside of them. Go to the southwestern imp cage and press the switch there to open a closet close by. Enter it and you will hear more closets opening with more imps. Go around to the second set of imp pens on the right, and look towards the southwestern one for a metal wall. Press the switch near the metal wall to open it and gain the red skull key. After getting the key, head towards the outdoor portion and look for a block which you can use as a lift. There is one on both sides. Take either lift up and head around the rocks to the west to spot chaingunners and a shack with a teleporter. Approaching it causes the side to lower as a lift so ride it up. Teleport then press the panel furthest to the right to exit.

On the north side of the beginning area, there is a lit lion switch. Press it, and head down the hall where you will confront one monster and two barrels in each subsequent room that you come to. At the end are some demons, barrels, and shotgun shells. Leave the passage through the switch at the southern end of the hall.

The crater in the middle of the outdoor portion of the map has an armor.

This level contains a teleporter exit, which means a suicide exit could be performed inside the exit room. It is not yet known if this would make the level faster to complete.