Like all maps in the megawad, the map features only one type of monster, in this case the shotgun guy. Using a number of new textures, it is set in a dark, grim, gray facility of an inscrutable purpose. 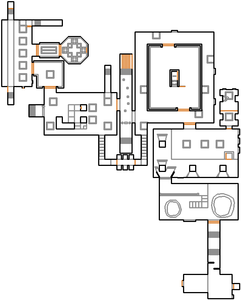 Map of Sergeant Center
Letters in italics refer to marked spots on the map. Sector, thing, and linedef numbers in boldface are secrets which count toward the end-of-level tally.

Head forward and, in the last room, press a green switch to the south. The red key will be deposited to the north. Open the red key door and head on. In the warehouse, head either across the conveyor belt to the east, or up the stairway to the south, to arrive at a looping corridor. Open either of the doors here, press the switch inside and get the blue key that will appear. Use it to open the blue key door outside the room. Go in, go up the lift, and head through the door outside. Open the door downstairs and head on forward. Press the switch to reveal the exit.

In the room with the crates, climb the stairway made of gray crates and press the switch at the top. This will deposit a chaingun and a box of bullets (along with a shotgun guy) on a nearby conveyor belt.

At several points, it is possible to block enemies or items from appearing on conveyor belts by standing in the place where they are supposed to appear. This can prevent getting 100% kills or make the level unwinnable (if the red key fails to show up). This is fixed in 1monster_bugfix.wad.

* The vertex count without the effect of node building is 1238.