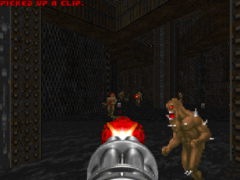 MAP03: Sifting Adjunct is the third map of UAC Ultra. It uses a music track from Abuse. 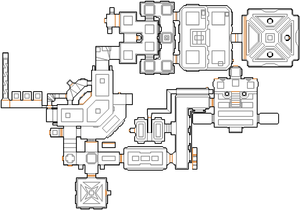 Map of Sifting Adjunct
Letters in italics refer to marked spots on the map. Sector, thing, and linedef numbers in boldface are secrets which count toward the end-of-level tally.

Grab the chaingun and open the door. In this hall, the yellow door is to your right so head left and into the grey water. Just follow the path killing monsters until you reach a lift with three ammo clips on it. Take it down to a switch and flip it, then take the lift back up. Several compartments are now open, so kill any monsters as you see as you head east. There will be a super shotgun on a platform, so take it and take either door to the next room. This large room has an arachnotron, a baron of Hell, several imps, and a couple of Hell knights. Proceed to the next room; as you approach, the red key will lower along with two arch-viles to the sides. Kill them and press the hand switch to open the door back.

Backtrack to just before you started heading through the grey water, where there will be a red door. Inside are some lost souls and chaingunners (the latter are on Hurt Me Plenty or higher). Flip the switch here to lower a lift with imps on it. Take this lift up and hit the next switch at the end of the hall, lowering back to the grey water region again. A new switch appears with imps guarding it, kill them and look out for cacodemons when you go to press this next switch. This switch opens up two side paths close to the switch, so take either one to a teleporter. This teleporter takes you to a hallway you have been in previously, but now you can access the yellow key.

The platform lowers upon touching it, and you will be back at the first hallway you were in, but with Hell knights attacking you (spectres on Hey Not Too Rough or lower). Open the yellow door and kill the imps and mancubus in this room. The next door reveals a hallway with several enemies. The first fork on the right has a rocket launcher which could come in handy. At the end of the hallway, you will reach the final room. Try to ascend the steps here and they will lower. Fight off the enemies for a bit, and then wait for the stairs to come back. A baron of Hell and some spectres will show up while you wait for the stairs, so kill them, as well as the revenants in the exit elevator.

* The vertex count without the effect of node building is 1673.

The map was originally created as a 'filler' map. It is made up of many cut up rooms of unfinished Doom 2 maps by Jon Vail, and retextured to utilize UAC Ultra's texture pack. Much of the mapping was done by Jon Vail, save for the exit room which was created by Super Jamie, however Jamie performed the majority of item and monster placement throughout the entire map. This map was originally planned for the MAP05 slot until it was agreed that the map was relatively short compared to the maps that were currently being worked on, and that it would be easy to tone down the difficulty to move it to the MAP03 slot instead.