MAP03: Signal Processing is the third map of Beta 64. It was designed by Antnee. 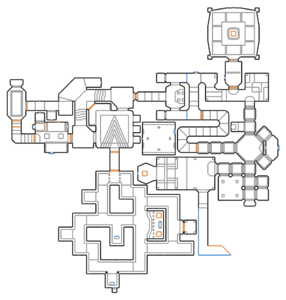 Map of Signal Processing
Letters in italics refer to marked spots on the map. Sector, thing, and linedef numbers in boldface are secrets which count toward the end-of-level tally.

Secret exit: After obtaining the blue key, backtrack to the starting area to find that the blue switch which used to be in front of the starting room has disappeared. However, a new switch has risen nearby: press it to cause a group of Hell knights to spawn in the corridors. After killing them all, the blue switch will appear again, and pressing it will lower two teleporters. Take either one to reach an out of the way room with two barons, and after you kill them, you will gain access to the secret exit switch that takes you to MAP32: Dark Secrets.

* The vertex count without the effect of node building is 1609.