MAP03: Skull Island is the third map of Plutonia 2. It was designed by Adolf Vojta (Gusta) and Pavel Tvrzník (Pipicz), and uses the music track "Gateway" by Stuart Rynn. The par time defined in MAPINFO is 2:00. 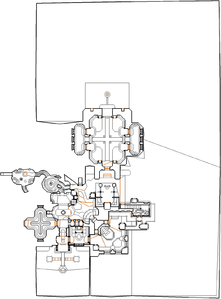 Map of Skull Island
Letters in italics refer to marked spots on the map. Sector, thing, and linedef numbers in boldface are secrets which count toward the end-of-level tally.

Grab the super shotgun and quickly dispatch any threats around. When you are ready, go northeast of your starting point, where you will find a blue door and a red switch. East from there, take the path up the steps and into a room with revenants and a switch. Press the switch and run through the bars that open. Keep going, killing the monsters as you progress into a bigger area where a megaarmor is in the slime pit. Trying to get the megaarmor results in an ambush however. The two doors next to the slime pit can be opened, Inside are shotgun guys and a baron of Hell guarding the yellow skull key. After getting it, head out, and take the western door. In the small room with revenants, head through the yellow door here, then head up and then through the next yellow door. There are a lot of health bonuses, shotgun shells, and the red skull key here. Picking up the key triggers a large monster ambush, both in the room and in a different area.

You should return to the starting point of the map. From the red key room, head back into the previous hallway, then head south towards the blue key (which cannot be reached at the moment). There is a skull switch on the west wall in this hall, press it, then run north and east through the bars before they close. Now open any of the doors leading north and you will be back at the starting area. A large number of monsters teleported here, so dispose of them, then press the red switch. Doing so reveals a mancubus behind you, but also opens some bars to the west. Go in that direction and through the cave, and there should not be red bars blocking the way to an arch-vile and a teleporter. When you take the teleporter, you will land on top of the blue skull key. Picking it up causes chaingunners and revenants to ambush you. After the ambush, go back to the blue door and kill the arch-vile there, then open the blue door. In this final area, a dead cacodemon and some candles outline an invisible crosswalk which you can walk on. The exit is to the north, and to reach it, you need to press four switches, accessible from the arachnotron platforms. Go to the west and east sides of the area, and climb the steps up, and after pressing the four satyr switches, another invisible bridge outlined by candles will be revealed leading to the exit.

This map is the only one in Plutonia 2 that does not contain any deathmatch starts.

* The vertex count without the effect of node building is 3387.