MAP03: Slige Control is the third map of Community Chest 2. It was designed by Ian Cunnings (The Flange Peddler). The name refers to the random map generator Slige. (See Inspiration and development.) 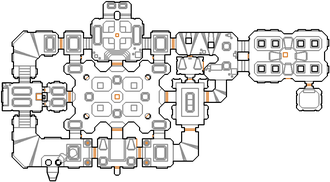 Map of Slige Control
Letters in italics refer to marked spots on the map. Sector, thing, and linedef numbers in boldface are secrets which count toward the end-of-level tally.

Open the door, and in this room, grabbing the shotgun causes four demons to teleport around you. Flip the switch to open the doors to the next area. The rest of the level is a circular layout, with an area in the middle where you will find the red key. A super shotgun is in the upper left corner, and a chaingun is in the lower right. There is also a chainsaw in the lower left. You will have to press four switches in the outer perimeters of the circle, and then press four switches in the middle chamber in order to get the red keycard. Be prepared for cacodemons and lost souls upon grabbing the key. The western door in this chamber leads to a control room with two switches, one is the red key switch which lowers the blue key in the westernmost room. The other switch opens the doors barring access to that room. Grabbing the blue keycard causes spectres to teleport around the area. The blue door is in the right part of the circular layout, after the room with the shotgun, and it contains the exit.

* The vertex count without the effect of node building is 2488.

The name of this map is derived from the fact that this map was originally designed for a 2003 contest at Doomworld run by Owen "Sarge Baldy" Lloyd, where participants would be assigned Slige levels, and then tasked with detailing them, keeping the original structures but making them look nothing like the originals. Cunnings was one of the participants who finished and submitted an entry. It had five successful entries, and a compilation wad was made. However, it was rejected for submission to the idgames archive for violating the Wad Rule banning the use of auto-generated Slige levels, regardless of the nature of the contest. Despite this decision, in 2007, the Tuning Contest WAD, the result of a similar contest involving a map created by Oblige, another random map generator (many entries of which also look nothing like the original,) was accepted into the archives. The Slige modification contest wad appears to no longer have any copies available online.

As Community Chest 2 was nearing completion, there were a few empty slots remaining, including MAP03 and MAP20. Cunnings would fill these slots with his SLIGE modification contest entry, and the previously unreleased Enigma, respectively.