MAP03: Starlight Square is the third map of DBP37: AUGER;ZENITH. It was designed by Matador and uses the music track "Sonic CD Stardust Speedway House Mix". The par time defined in MAPINFO is 1:40. 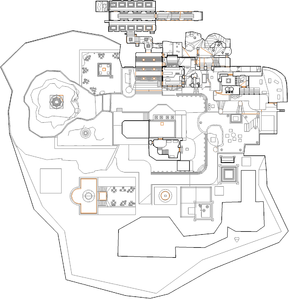 Map of Starlight Square
Letters in italics refer to marked spots on the map. Sector, thing, and linedef numbers in boldface are secrets which count toward the end-of-level tally.

Exit the train via the landing platform to the south and climb the staircase to exit the train station. You will exit atop a large staircase leading into the titular Starlight Square. From here you will need to head to the building at the far north-eastern corner of the map either by breaking through the topmost glass window on the eastern wall (the one housing a super shotgun) and heading through the southern door once the path dead ends or by navigating to the ledge behind the bookstore and jumping through the glass window to the building east of the ledge and heading up the stairway. From here, leap through the window onto the ledge of the black building to the south and head south-east along the edge until it dead ends. Run south across the gap to the rooftop park and climb the staircase to the east. Shoot the glass and jump through the window of the northern building to enter a server room. Head west from the window and go through the door to enter an office housing the blue key. Grab the blue key from the desk and head back through the window you entered from.

After dropping down from the window, head towards the riverfront and drop down into the water. Head south and climb the ladder on the western wall leading up to the blue key door. Go through the blue key door and take the stairway to the building's rooftop. Grab the red key and drop down from the northern end of the roof. Head back up the giant staircase and return to the train station. Head back to the player spawn point and open the red door. Exit the level by running through the darkened train car.

* The vertex count without the effect of node building is 11311.