MAP03: Storage House is the third map of The Twilight Zone. It was designed by Paul Corfiatis in early 1997 and uses the music track " ". The par time defined in MAPINFO is 1:40. 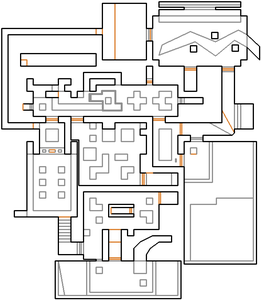 Map of Storage House
Letters in italics refer to marked spots on the map. Sector numbers in boldface are secrets which count toward the end-of-level tally.

You start outside on a small balcony with the entrance of the storage house directly in front of you. Behind the door is a lift which takes you inside to a room of crates and chaingunners where the chaingun is easily obtained.

A. - A switch (A1) inside a small room at the centre of the first crate room opens the door (A2) on the SW side of the room. A cacodemon will attack you but is easily finished off with the chaingun. Go down the stairs and progress north into the next room of crates.

B. - In the central room of crates, fight off the cacodemon (which the chaingunners should kill for you), baron of Hell and Hell knight, and find a switch (B1). This switch opens a small door (B2) on the far eastern side of the room revealing the blue key.

C and D. - Go through the blue key door into another room of crates where you must fight off more chaingunners and cacos. At the SE side of the room is a small room with the red key and a switch (C1). Press that switch and go back out through the blue key door into the central room of crates and on the far western side a small door (C2) has opened revealing another switch (D1). The red switch lowers the red key (D2) and then progression is pretty much straightforward. The yellow key is obtained in the northern part of the map and the exit is easy to reach via the northern loop.