MAP03: Testing Chambers is the third map of Hellbound. It was designed by Zoltán Sófalvi (Z86) and uses the music track "Agony Rhapsody," originally composed by L.A. Sieben for TNT: Evilution. 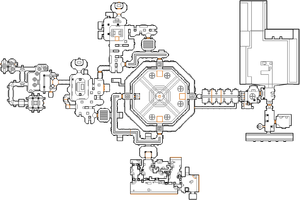 Map of Testing Chambers
Letters in italics refer to marked spots on the map. Sector, thing, and linedef numbers in boldface are secrets which count toward the end-of-level tally.

After the opening segment when you reach the octagon-shaped area through a ventilation shaft, check the other vents in the area, as you can walk through one of them. You will enter an area where human experimentation has been undertaken, explaining the name of the level. This is not an official secret area.

* The vertex count without the effect of node building is 6533.