MAP03: The Cliff Top Fort is the third map of The Talosian Incident. It was designed by Dan Huff and uses a music track by John Bye (Gestalt666). 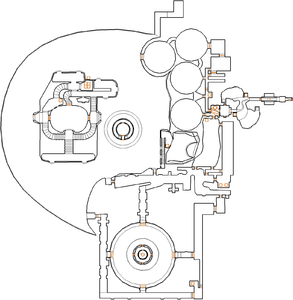 Map of The Cliff Top Fort
Letters in italics refer to marked spots on the map. Sector numbers in boldface are secrets which count toward the end-of-level tally.

A berserk pack (thing 46) which only appears on Hey, Not Too Rough or lower, is outside the map boundaries, meaning the maximum number of items possible on those skill settings is 50%.

* The vertex count without the effect of node building is 2433.