MAP03: The Dreaming Garden is the third map of Sunder. It was designed by Insane_Gazebo and uses the music track "Under Death," originally composed by Mark Klem for Requiem. 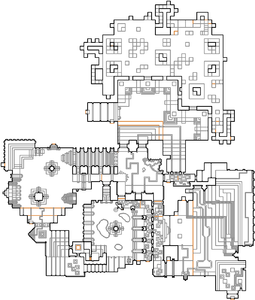 Map of The Dreaming Garden
Letters in italics refer to marked spots on the map. Sector, thing, and linedef numbers in boldface are secrets which count toward the end-of-level tally.

The super shotgun is right next to you at the start, and a rocket launcher is to the north. This will be a tough beginning room to get out of, with a cyberdemon to the south, Hell knights on the ground, and mancubi on the upper walls. The red button on the brown wall to the north is what you are after, and it has to be shot instead of pressed. Doing so opens the door to the north, with an arch-vile behind it. A plasma gun is to the right, take it and head left. In this courtyard, go to the switch at the south end and flip it, which will cause bars to lower to the north which block the next switch. While they are lowering, you will need to fend off the revenants and barons of Hell that are showing up. Note that the higher ledge has only five revenants on it, plus a teleporter that takes you to the east; use this to escape from the enemies if needed. Once you are able to, flip the switch to the north which will open bars to the east.

Up here is a cyberdemon, two locked doors to the north, a passage southwest leading back to the starting room, and a red door to the southeast. Take the passage, which will lead you to the upper ledge where the mancubi were located, then go all the way south to the switch. Three arch-viles will show up as you do, one on the ledge further back, one in the starting room itself, and one in the second courtyard. Be quick in getting rid of them so they will not resurrect the enemies that you have already slain. Flipping the switch at the end opens the southern bars in the second courtyard.

As you get past those bars, pick up the green armor if needed and get rid of the cyberdemon if you have not killed it yet, then pick up the red key. With this key, head back to the middle of the map and take the southeast door with the red skulls. Follow this hall to the next courtyard. A megaarmor is in the middle, and a teleporter is at the south end which will take you to a high ledge at the northwest part of this courtyard (there is also a lift that can lead up to this high ledge). The eastern walls will lower when you go to the middle of the courtyard, revealing a cyberdemon at the southeast and a horde of Hell knights and barons of Hell to the north. A switch is on the cyberdemon platform, which will open the door at the north end behind the baron of Hell/Hell knight wall. Get the ammo and flip the switch in this small room to open the door out of the courtyard, but be wary of a teleport ambush consisting of more Hell knights as well as mancubi who will show up on the high ledges. If for some reason the red door closes when you approach it, go back to the switch and flip it again.

Back at the middle room, the two locked doors at the north end will now be open. Grab the ammo and soul sphere, and once you step onto the grass, a wall to the left will lower, revealing barons of Hell and two switches, while the wooden porch to the next building will have hordes of imps teleporting in. These imps will not leave the porch. To the south will be a megasphere and some more ammo. In the closet where the barons of Hell were located, the switch on the south wall will open the doors back to the middle again, and is repeatable, while the switch at the far end opens the doors to the wooden building.

The wooden building will be completely empty upon your arrival, with supplies scattered at the perimeters. Note that there are two lava pits at the right side of the room. If you fall in them, use the north side to get out. In order to get the yellow key in this room, you must press a series of switches, but be warned that monsters will continue to teleport in as you find each switch, so it is recommended to work quickly. The first switch is up the northeast set of metal steps. This switch opens a passage at the west side of the building and also causes revenants and Hell knights to teleport in. Take the west passage and the steps up, then you will be able to reach the next switch on a block. This switch causes cacodemons and Hell knights to show up, plus three pain elementals. The passage at the southeast end will be open, so take it up, ignore the teleporter (this takes you to the west passage, which can serve as an escape route), and press the next switch. If you drop at the right side of this switch's platform, you will find an invulnerability, which will come in handy as the next wave will bring in five arch-viles and a cyberdemon. The northernmost passage behind where the yellow key is should now be open, allowing you to finally reach the yellow key.

Grabbing the key opens the doors back to the courtyard. Get rid of any remaining enemies and go back to the middle of the map, opening the doors with the nearby switch if needed. Go all the way back to the starting point and open the yellow door to reach the exit.

* The vertex count without the effect of node building is 5525.