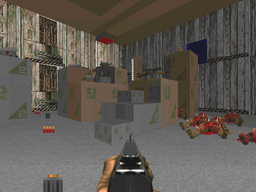 The central room of the map

MAP03: The Dumpster, designed by Yonatan Donner, is the third map of Hell Revealed. It uses the music track "Smoke And Mirrors" from Rise of the Triad. 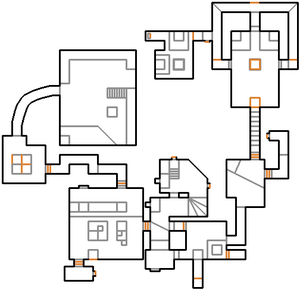 Map of The Dumpster
Letters in italics refer to marked spots on the map. Sector, thing, and linedef numbers in boldface are secrets which count toward the end-of-level tally.

Drop down the chute and clear a path to the switch on the right hand wall. Hit this and a stair will gradually rise to a switch on the left - leave this for the moment. Run back to the start and head through the door. In this room there is a switch high up on the left hand wall. The nearest set of crates in front of you can be used as a staircase. Run to the top, jump to the next set of crates, then turn left and jump to the switch. This raises a bridge behind you to the yellow key.

Run back to the start area and hit the switch you left earlier. This brings down a lift opposite the doorway. Ride this up and run through the first room. In the next room will be a doorway on the right, follow this to a switch. Head back to where the lift rose and there will be a hole in the floor. Drop down, take the teleporter to the raised bridge and take the yellow key.

Ride the lift up again. This time run forward through both rooms, through the yellow key door, and lower another lift. This leads to a room with a pillar in the center and passages on either side. Take either passage and follow it around until you reach a switch. This opens the wall behind you revealing a passage back to the pillar room, which has now lowered to become a teleporter.

The teleporter leads to a large room with high ledges around three walls. Take the staircase up the nearest ledge, and jump from ledge to ledge until you reach a curving passage. Head through this and when it reaches a small square room take the doorway on the left. Head through here and after a short passage you will find a red key, and another doorway opening on the yellow key room. In the southwest corner of the room, next to the switch, is a red key door. Open the door and hit the exit switch.

The room in the center north of the map contains a super shotgun.

In the far west of the map is a square room with four pillars. The nearest pillar has a switch to lower it to the floor, which reveals a switch on the next pillar. Likewise all four pillars can be lowered in sequence, and on the final pillar is a supercharge.

This map is relatively small but cluttered, and the standard route requires the player to pass several points multiple times. Optimizations therefore involve simplifying the route.

In the yellow key room, if the player rapidly strafes backward after hitting the switch, they will be able to jump to the bridge as it rises. This eliminates the need to teleport to the bridge and cuts out one circuit of the map. Since the player can't see where they're jumping to, this jump can be quite difficult at first. It was discovered by Adolf Vojta (Gusta). [1] In TAS runs this whole trick is performed while the lift is lowered, but there isn't enough time for this on a run recorded at normal speed.

Another jump can be performed in the rocket launcher room: from the topmost ledge, the player can jump directly into the entrance to the curved passage. The gap is shallow enough that strafing is unnecessary.

Since the main lift takes around eight seconds to lower and raise again, most players activate it as quickly as possible and kill monsters while waiting for the lift to arrive. This is also done after hitting the first switch to make the second accessible. Chaingun is the weapon of choice throughout this run, since weak monsters blocking the player's path are the main obstacle to a good time. The many narrow passages choked with monsters are the main reason this level is yet to be completed pacifist style.

Maxkill demos also use the yellow key jump, since it can be performed without skipping monsters, although they tend to clear out the yellow key room of monsters first. [3] Maxkill players also have access to the super shotgun, which is used in preference to the chaingun. The rocket ammo picked up is used to take out the grouped imps and former humans in the rocket launcher room.

Respawn demos are scarcely any different from standard Maxkill, since on the fastest route the only opportunity to kill respawned monsters comes when returning to the yellow key room at the end of the run. [4]

Bullet supply throughout the level is plentiful, so with minimal infighting Tyson demos can be performed from start to finish with pistol only. To allow ammo to be used more freely players may punch out demons with the fist, and the yellow key jump will also speed up demos. [5]