MAP03: The Islet is the third map of Erkattanne. It was designed by Nicolas Monti and uses a rendition of the track "True" by Spandau Ballet, sequenced to MIDI by Nicolas Monti. 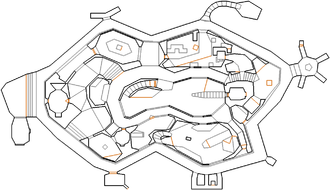 Map of The Islet
Letters in italics refer to marked spots on the map. Sector numbers in boldface are secrets which count toward the end-of-level tally.

The level has three keys. Once you take one, beware of several traps that open around the level. Also mind the chaingunners that make the prominent appearance.

Take the shotgun and open the door in the starting room. In the internal corridor go forward and take the first staircase to the left. Head to the left again until you can exit to the surrounding slime/nukage corridor. Carefully follow this corridor to the left to eventually come to a staircase at the south east that leads down into a dark room. The key is put here. Go slightly right to find a lift and travel up. Preparing to spectre and chaingunner ambushes, take the keycard. The floor will be sunk, so to go out of this room you have to find a switch near the lift you lowered.

When back in the slime/nukage corridor, head all the way toward north where you discover an UAC door to the left of you. Go to the stairs at the other end of the room. In the sequent room flip the switch to make the key obtainable. Now, jump down and descend into a room where you can take the keycard.

Go to the internal corridor and the stairs in the west again. This time, open the blue door in this room to the left. First, kill the chaingunners and former sergeants at the balconies atop. Then, press the switch to make the key accessible. To get the key return to the outer slime/nukage corridor and head to the west stairs that were previously not built. Take the keycard and head back to the inner corridor. Open the yellow key bars (north west of the corridor) and descend to the outside. Fight the enemies and go to the exit door. Kill one or two imps and finish.

You can find a chaingun in the room right (east) of the start. There are also health bonuses and a stimpack.

At the south east of the slime/nukage corridor there is a brown door. Behind it is a room with a super shotgun and a chaingunner.

A multiplayer-only BFG9000 (Thing 233) has no flags set for any of the three difficulty classes, so it does not actually appear in the level.

* The vertex count without the effect of node building is 704.