MAP03: The Room Taking Shape is the third level of the first episode of Back to Saturn X. It was designed by Paul DeBruyne (skillsaw) and uses the music track "Drilling By Night" by Stuart Rynn (stewboy). The par time is 1:30. In the official add-on version, this level's name is Drilling By Night, taken from its track title. 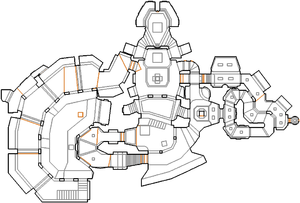 Map of The Room Taking Shape
Letters in italics refer to marked spots on the map. Sector, thing, and linedef numbers in boldface are secrets which count toward the end-of-level tally.

Step round the imp in front of you to get a shotgun, then go up the steps ahead to enter a room with one or two zombiemen. Head north along a corridor to a switch and flip it to lower the nearby lift, then ride the lift up and kill a cacodemon (or revenant on Ultra-Violence (UV) and Nightmare (NM) skill levels) waiting next to a computer column. Head down either staircase on the north side of the room to a seemingly empty room with a button; pressing it will open the computer column and reveal the red keycard, but it will also release imps, zombies and a demon around you. When you collect the red key you will find that four more closets holding various enemies have also opened.

Drop through the windows to land in the starting area, then walk south to a storage area with a couple of crates. Open the red key door on the west side and head straight forward to find a rocket launcher, which you can use to kill the mancubus and Hell knight (or arachnotron on Hurt Me Plenty or higher) waiting outside, next to a pillar holding the yellow keycard. Go up the steps leading around the outer wall, then climb up two flights of stairs to enter a corridor with some crushers - as you pass under each crusher, watch out for zombies, demons and cacodemons lowering behind you or to your left. After passing after the fifth crusher, look for a button on your right and press it then drop down to the ground below to find that the yellow key has lowered it along with a second pillar holding a super shotgun - taking the key will open a nearby closet as well as allowing mancubi to teleport to the crusher hallway.

With the yellow key, climb the steps and pass through the crushers again to get to the button you pressed earlier, then continue on to a yellow key door that leads back to the red key area. Head east to another locked door and open it, then drop down to the corridor below and open a third locked door in front of you; the hallway ahead leads to the exit door, but watch out for a pain elemental and chaingunner being released in front of and behind you as you get close. Once you reach the door, open it to find the exit switch (plus a medikit on I'm Too Young To Die and Hey Not Too Rough).

From the start, head straight forward up the steps to see a square column in front of you. There is a switch on the south face of the column that, when flipped, will lower the nearby computer screens. The looping hallway behind these screens holds a chaingun.

* The vertex count without the effect of node building is 1529.