MAP03: The Wall is the third map of Ashes 2063. It was designed by Vostyok and uses the music track "Ghost Town" by John Weekley (PRIMEVAL). The par time defined in MAPINFO is 5:10. 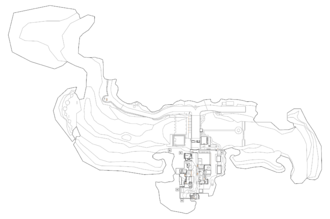 Map of The Wall
Letters in italics refer to marked spots on the map. Sector, thing, and linedef numbers in boldface are secrets which count toward the end-of-level tally.

The (absence of) data was last verified in its entirety on August 5, 2022.

Originally intended as a combat focused map featuring occupying mutant enemies, the dam eventually became a friendly settlement in the release. An oversight during mapping is the eastern courtyard and truck visible from the earlier tutorial - this opening is conspicuously absent when the player later travels to the other side of the fence.