MAP03: Three is a Charm is the third map of Community Chest 4. It was designed by James Cresswell (Phobus) and uses "They're Going to Get You," a music track from Doom by Robert Prince. 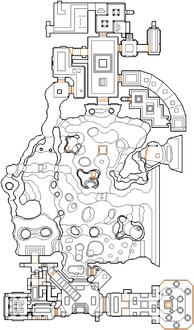 Map of Three is a Charm
Letters in italics refer to marked spots on the map. Sector, thing, and linedef numbers in boldface are secrets which count toward the end-of-level tally.

There are two keys in the level: yellow is required and blue is needed to access several optional areas.

In the room you begin the level, turn right and open wide door. The key is on an inaccessible pedestal in the eastern room. To get the key you need to flip two switches, one of them lowers the pedestal and the second one opens the blocking-way bars to the bottom part of the room. You can flip the switches in any order: 1) lower the lift to your left which is taller and proceed into the room. You will be at the very top part of the yellow key room. Go around toward the switch. Flip it to lower the pedestal with the key. Backtrack to the room with two lifts. 2) Use the lift to your right (south) which is shorter than the other. Proceed into the room and go around the fence to the switch. Flip it to get access to the bottom part of the room. Backtrack to the previous room with two lifts.

Now go straight across the hallway to the yellow keycard and take it. Go back to the starting room.

In the starting room, go into a dark closet northeast. Open the yellow door to get outside. In the outside, go northeastward to the fence and two bars on the water. Cross them to get to the other side. Here, you can: 1) Instead of using the lift ahead, turn left and go all the way northwest, then climb the stairs until you meet the yellow door north. 2) Use the lift north. At the top, head right and where there is no fence, go down on the stairs to the yellow door leading north. Open the door. In the next room, there are several areas to go. Most doors here lead to fake exits, while the northeastern one leads to an actual exit. Enter that door and go straigh. An exit ahead will appear and will close as soon as you come closer to it. This one is also fake. There is also a northern door in this room. This is the real exit. Enter this door and press the button to finish the level.

* The vertex count without the effect of node building is 3892. 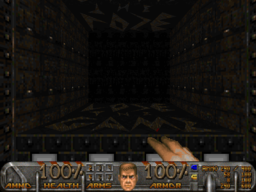 A prerelease screenshot of secret #9 published in the compilation progress and changelog thread [dead link] to announce that the message featured within was replaced.

Secret #9 originally contained a message reading "Lose the Game," a reference to a mental game called The Game where the objective is to avoid thinking about the game itself. When the level was first submitted in 2008, the Game was popular on the Internet. On April 4, 2012, project leader Eric Baker (The Green Herring) replaced it with the Community Chest logo, as by that time, the reference had become dated.