MAP03: Toxin Refinery is the third level of most console versions of Doom, based on the original E1M3: Toxin Refinery with modifications made to accommodate consoles' limitations. The author of the conversion is American McGee, and the original authors of the map are Tom Hall and John Romero. The map first appeared in Atari Jaguar version, and is additionally used in the 3DO, Sega 32X, Game Boy Advance, Sony PlayStation, and Sega Saturn versions.

This level contains a secret exit leading to MAP24: Military Base. The Sony PlayStation and Sega Saturn ports will lead to MAP56: Military Base instead, which is the same level in a different map slot. 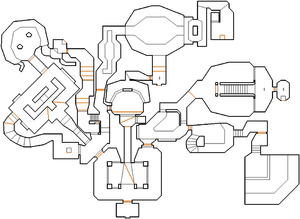 From the start, go through the first door and turn left. Follow the path to the next door. Go through this door and bear right. Walk straight on, through another door, and turn right into an outdoor area with a grey walkway with nukage on either side. Travel to the opposite side of this area and past some computers. Turn left and follow the passageway along until you see a blue keycard on a raised step. When you pick this key up, the lights in the passageway will turn off.

Return to the large room just north of the start point. There is a blue door here; go through it and enter one of the passageways on the opposite side of the room. You should now find yourself in a large room with an archway. Walk through the arch and some stairs will begin to rise up. Go up the stairs and through the exit door. Press the switch to finish the level and go to MAP04: Command Control.

From the start point, go through the first door and turn left. Follow the path to the next door. Go through this door and bear right. After going up the short staircase, turn left and down another staircase. Turn left and you will come to a switch that opens a passageway near where you entered this room. Walk along that passageway into a dark room with yellow-lit panels on the walls. Just after reaching the top of the staircase, you will cross a hidden line that causes two nearby ledges to lower for a few seconds. Run up and around the computers to the right, so that you reach the back ledge before it rises again. A large door now opens in front of you, revealing a room with pillars, a nukage "river", and a rocket launcher. Follow the river into the tunnel on the east side of this room, and you will reach a small brown room with a switch and a backpack. Press the switch.

Return to the large room just north of the start point. You should now see a bridge across the nukage pit. As you cross the bridge, the wall in front of you will rise revealing a long passage. Keep walking straight ahead, and three traps will open: the brown technical wall in front of you, then the wall to your right, and finally two large doors at the back of the room. Behind these large doors is a brightly lit gray passage leading to an exit door. Go through this door and press the exit switch to go to MAP24: Military Base (or MAP56 in certain ports).

If you fall into the nukage pit in the first room, you cannot get out.

On your way to the outdoor walkway, you will see a recessed panel to your right, indicated by white lights. Activate this wall to open a secret window, which allows you to look into one of the traps in front of the secret exit (containing barrels and zombies).

When you take the blue keycard, a door will open in the north wall of the room , revealing an imp on I am a Wimp or Not Too Rough skill levels (IAAW/NTR), three imps on Hurt Me Plenty (HMP), or four imps on Ultra Violence (UV). The alcove they emerge from contains a box of bullets, a box of shells and a medikit.

In the area with the switch that opens the computer room, the north wall is actually a lift. There is an armor pickup on the lift and a shotgun at the top.

The yellow keycard is located in a short passage through the center of the dark western room. It is not needed to finish the level, but is required to open the door past secret #5 (see below).