MAP03: Twisted is the third map of The Enigma Episode. It was designed by Jim Flynn and uses the music track " ". 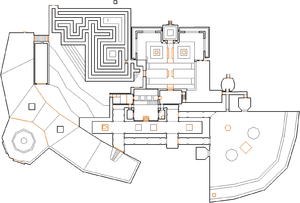 Map of Twisted
Letters in italics refer to marked spots on the map. Sector, thing, and linedef numbers in boldface are secrets which count toward the end-of-level tally.

You start right on a brick room with green pillars to each side. Go to the west side end of the room. The last pillar as a small crack where you can attack a cacodemon, and it is also a lift, so press it and move forward to pick up the items in front. This will activate the next pillar in front of you to lower down, and so on with all the following pillars, until you reach the last one, wait for it to go up again and press a skull switch on the wall. This will open up the new area behind you, to the south.

Now turn left, to the east and keep moving until you reach a red room on the north wall, guarded by some mancubus. Inside is a switch that will lower the platform. Move and go near the bottom of the platform, you'll see a hidden door on the north side. This little room contains some useful items. Right in front of the blue armor there is a hidden door, again, which will reveal to you the next switch. Press it and go back to the platform and wait to go up. Now the red key, on a little room on the south, will be ready for you to pick up.

Now keep following the path forward and you will enter a red room area. Keep moving west until you reach the second red room. Now, to your left, on the south wall, there's a hidden door right on the upper corner. Jump into the other side but slowly and carefully to avoid jumping into the portal. If you do this correctly, you'll find right over the yellow key. Now, take the portal.

You will be in a new area near the exit. Turn back a little, to the west, and you will see a silver door on the lower floor. Go through it. Once you are outside, walk to the left near the wooden walls. On the end of the wall you will see a small aperture where a silver platform is. This will lead you to the start of the map. Now go to the original area where you started the level, move slightly to the southwest and you will see an opening where the blue key lies.

Now you have all the keys and can simply go back to the exit area, right before the yellow key. Open the doors and finish the map.

* The vertex count without the effect of node building is 1057.

The original version of this level was UPDOWN.wad.