Virgil's Lead is a map that is part of the Master Levels for Doom II. It was designed by John Anderson (Dr. Sleep), and is contained in the file VIRGIL.WAD. 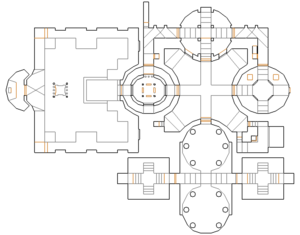 Map of Virgil's Lead
Letters in italics refer to marked spots on the map. Sector numbers in boldface are secrets which count toward the end-of-level tally.

In the starting area, pickup the shotgun, go down the stairs and head right and lower a wall with a baron texture. Open the door. You will find yourself in a marble hall with columns. There, rise upstairs and open the door in the north of the hall. In the open crossroads area, go straight and enter the door. Inside, head to the left, enter the door, turn around the corner and open a wall to the east. Press the switch, return to the entrance previous of this area. Grab the yellow key and open the second door in the east (though it is not indicated by yellow bars, it requires yellow key). Inside the room that is similar to that western on, open the door south. Press the skull switch in the east of the next room which is full of Hell knights. The switch opens the door leading to the blue key area. Return to the crossroads area via the door and go to the opened door in the southwest of the outside. You will find yourself in the area which resembles the starting one. Grab the blue key here. Again, as you did in the beginning of the level, lower a wall with the baron artwork, this time in the west of the room. Return to the crossroads area (the central outside), open the western door requiring the blue key (this is unmarked by blue bars). You are in a small room now. Approach automatic bars in the north of round corridor. They will allow you to enter the central closet. There are four platforms each having a button on them, press any one to lower. Grab the red key, wait until these bars rise, press the western switch (one that looks already lit) this will unlock the door in the west of the circular corridor. Press any button except the western one to get out. Enter the aforementioned door.

Get to the other side of the blood pool (it does actually not hurt), lower either lift in the southwest or northwest. Open the baron door requiring the red key (again, there are no bars indicating this but instead, this is marked by green torches). Inside, approach the green flame sticks. A pillar will start rising from the floor. Use the button on this pillar. This button will temporarily lower the bars locking the exit teleporter that is situated right behind you. Jump over to the teleport pad to finish the level.