MAP03: Water Treatment Plant is the third map of NOVA: The Birth. It was designed by Josh Baker (mrthejoshmon) and uses the music track "Going Too Far," by nub_hat. 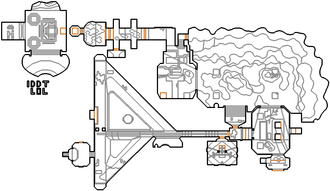 Map of Water Treatment Plant
Letters in italics refer to marked spots on the map. Sector numbers in boldface are secrets which count toward the end-of-level tally.

Enter the room with the exit door, then return all the way to the room at the south end where the blue key was. The door here will be open. Enter this room, then use the terminal on the north wall. Afterwards, return to the starting room, finding a teleporter taking you to a hidden room. The switch you see in the terminal in front of you opens up the room ahead, containing a super shotgun and the author's initials.

* The vertex count without the effect of node building is 2582.