MAP03 is the third and final map of 99 Ways to Die. It was designed by Warren Marshall. 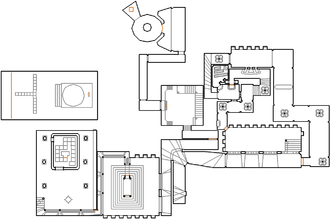 Head north from the starting position, then, at the crossroads, take the south-western path. Continue into an outdoor area and press the skull switch there, lowering a lift. Take the lift up and head down the passage, pressing the gargoyle switch on the way. You will arrive into another outdoor area. Enter the building here (opened by the aforementioned gargoyle switch) and find the red skull key at the top of the winding stairs.

Now return all the way to the crossroads near the start, and this time take the north-eastern path. Open the red key bars at the end and proceed to a green marble room. Open the door with the baron face to the west and follow the corridor to reach a circle-shaped lift. Walk onto the lift and wait until it brings you to a niche with a teleport pad. Enter the teleport (on hard difficulty the teleport doesn't work, see #Bugs; you will have to cheat) to reach the final area, where the exit switch awaits to the east.

The south-eastern path in the crossroads leads to an optional area, containing some ammo and health. It begins with a small outdoor yard, where a door in the north-west corner leads to an underground passage. Follow the passage until you drop down into a cage, which you can open with a switch inside. Head down the passage to the south-west, all the way to the door back into the main part of the level.

Due to the bug that prevents the completion of the map on Ultra-Violence or Nightmare!, speedruns use the fixed version 99ways03-fix.wad (created by Memfis). 99ways03-fix.wad is available for download here at the Doomed Speed Demos Archive.

This information was last verified in its entirety on July 21, 2019.

* The vertex count without the effect of node building is 2009.