MAP03: Acid Base is the third map of Crimson Canyon. It was designed by Jeffrey Graham and uses the music track " ". Another version of this map is in Community Chest 2: Annihilation Invention. 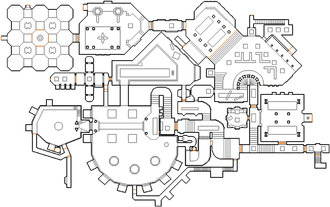 Some monsters might not teleport, for example the cacodemons in screenshot #2's room.

* The vertex count without the effect of node building is 2181.