MAP03 is the third map of Dystopia 3. It was designed by Anthony "Adelusion" Czerwonka and Iikka "Fingers" Keränen and uses the music track "". 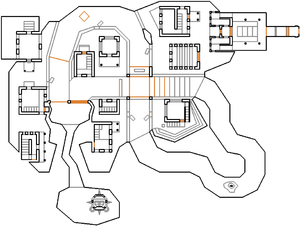 In the span of one level, Doomguy has gone from crashing a car to crashing a spaceship. Get out of the crashed spaceship, kill the zombiemen in the tunnel to the north, and continue forward. You will enter a large outdoor area with numerous buildings, scattered enemies and two large banners marked "START" and "FINISH". This is a time trial. You have to complete the figure-8 racetrack within about 17 seconds on Ultra-Violence and above (you get more time on lower difficulties), or you will be suddenly and instantly killed. The moment you run past the "start" banner, straferun all the way, go around any monsters and most importantly, don't stop for anything.

Besides dealing with the monsters on the track and sniping from the surrounding areas, the track also has a couple of tricks up its sleeves to stymie you. In order, these are what you will encounter on the track:

After completing the race, gates in the racetrack walls will have opened up, allowing access to the buildings. This still being a city-map, your next job is to clean out the opposition so that you can progress the level more easily. You can expect arachnotrons, mancubi, and imps, with the standard hitscan fare of shotgun guys and chaingunners in elevated positions. Clean them out so that you're not taking unnecessary damage later.

Once the enemies have been taken out, go to the open gate next to the start line. Go around the brick building, kill the imps and head south to the dark brown building. Enter it through the east. Watch for chaingunners in the raised area in the west. Take the stairs up to the raised area and flip the switch.

Next, head north to the building with black and white square panels. Kill the imp (Hey, not too rough and below) or revenant (Hurt me plenty and above) inside, then head through the doorway to the north. In this stone area, kill the imps and grab the blue key from the southwest.

Next, head to the gate just southeast of the track intersection. As you go through the gate, a small stone square will rise out of the ground, blocking you from getting to the staircase required to enter the next building. Go through the gate to the west and enter the grey brick building. Climb the stairs to the top and flip the switch to lower the stone square. Go back to the gate directly opposite, climb up the stairs and open the blue door. Collect the yellow key in this room.

Backtrack to the track intersection and head through the gate to the northeast. Go around to the north side of the brown stone building. Watch for imps and a cacodemon (Hurt me plenty and above) in ambush, as well as former humans in the windows of the building to the east. Go through the yellow door, head up the stairs (watch for the chaingunner at the top of Hurt me plenty and above). Step onto the ledge in the west and collect the red keycard.

Finally, head back downstairs and into the brick building to the east with the windows. Watch for a mancubus (cacodemon on Hey, not too rough and below). Kill it and head further in. Kill the baron of Hell in front (Hell knight on Hey, not too rough and below), as well as the shotgun guys on the surrounding catwalk. Head up the steps, and cautiously head forward into the darkened tunnel ahead.

As you walk into the tunnel, a complex set of crushing ceilings will activate. You have to be patient and wait for all of them to rise at the same time before running through.

Open the wooden wall ahead. Mow down the demon (Hey, not too rough and below) or cacodemon (Hurt me plenty and above). Pick up the rocket launcher for the next map, and flip the switch to exit the level.

* The vertex count without the effect of node building is 1144.

The "time limit" on the race is enforced using a voodoo doll system.