MAP04: 60 Feet Under is the fourth map of 10 Sectors. It was designed by Cephaler and uses the music track " ". 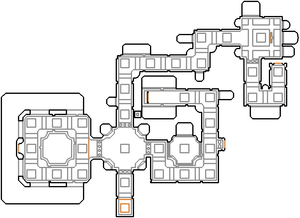 Map of 60 Feet Under
Letters in italics refer to marked spots on the map. Sector, thing, and linedef numbers in boldface are secrets which count toward the end-of-level tally.

Take the open tunnel at the start killing the monsters in it. This tunnel leads to a switch with red bars around it. You can use this switch, revealing several enemies around you. Return to the starting position to find another tunnel has been opened. Follow this tunnel all the way to another switch, this time with yellow bars around it. Use it and return to the starting position again, looking out for reinforcements as you head through the next open tunnel. Head around to find a plasma gun and a switch with yellow skull markings. Use this switch and go straight east, through a tunnel you previously went through. Hit the switch with blue bars around it, and head through the very first tunnel you came through again. A new path will be open where the first switch was, so take it to the final switch, with red skull markings around it. Make your way back to the starting position and go straight south to the exit. Note that if you are trying to quickly escape from enemies, you might get surprised as you teleport backwards just before reaching the exit.

* The vertex count without the effect of node building is 1162.