MAP04: A Fistful of Imps (Resurgence)

MAP04: A Fistful of Imps is the fourth level of Resurgence. It was designed by Josh Sealy (Joshy) and uses the music track "Fire Hive" by James Paddock, taken from the Plutonia MIDI Pack. The level is a combination of MAP04 and MAP05 of Surge. The level is the last to take place in the red underground cave network in Hell, with the building and ruins in the north end of the map starting the thematic shift to a more Gothic environment. 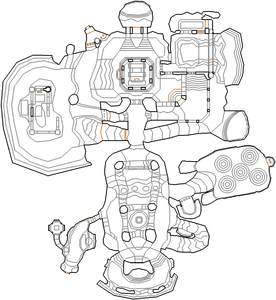 Map of A Fistful of Imps
Letters in italics refer to marked spots on the map. Sector, thing, and linedef numbers in boldface are secrets which count toward the end-of-level tally.

As with the previous two levels, monsters will be immediately alerted to your presence when you start, so move quickly. Without waking the imps in front of you, turn either left or right, and run into the tunnel leading into a small cave behind the start area, and take the rocket launcher and the rocket boxes. Use the rocket launcher to clear out the monsters in the start area, and be sure to pick up the berserk pack. Head for the steps next to where the revenants were, and go up them into a dark, narrow cave. As you enter, you will notice a switch at the end of the cave guarded by either a Hell knight on Hurt Me Plenty and higher skill levels, or a cacodemon on Hey, Not Too Rough and lower. As you proceed further, some zombies will appear out of the lava. Clear all monsters in the area, then press the switch at the end of the cave. Return to the cave entrance, and on your left you will see that some brown-yellow rock columns will have risen, allowing you to reach another cave on the other side.

When you are across, you can see that a large body of lava lies ahead, there is a switch to be pressed at the far end, and also take note of the soulsphere behind the bars on the right. Move forward and take both the radiation suit and the partial invisibility, and cross the lava to hit the switch. Turn to face the entrance and you will see that two areas have opened next to the steps you just came down, both containing a large number of chaingunners. At the same time, monsters will start teleporting on to the steps. You can either take advantage of the reduced accuracy of the chaingunners due to the invisbility effect and exploit infighting, or clear all the monsters quickly using the rocket launcher. Be very careful if taking the latter option, however, as spectres will be among the monsters that have teleported in, and they are very difficult to spot against the red background of the cave.

Once the monsters are cleared, go back up the steps, and pick up the soulsphere. Leave the cave, and you will see that a new area has opened up on your right. This leads into a short tunnel with flooded with a dark grey liquid. A shotgun and chaingun are placed here, though it is likely you already have the latter. Go straight on through the tunnel, and you will find yourself at the foot of a small tower made of brick. Kill the zombies around you, and be particularly careful of chaingunners on the ledges above. On the other side of the tower, go up the steps into the small opening, and as you enter the small cave, watch out for the revenant hiding around the corner, between the two entrances. Kill the revenant, and press the brown wall to lower it, then stand on the platform and wait for it to raise. Run forward off this ledge and into the tower. Go up the brown lift in front of you, clear the imps, and run out of the window to the left - specifically, the one from which the red skull key is visible - onto one of the ledges. Watch out for more imps as you make this jump, unless you killed them while you were at the foot of the tower. Take the rocket boxes here and then the red skull. As you take the skull, the floor will rapidly lower, revealing another area containing either one or two mancubi. Also be aware that a large number of revenants will have appeared around the bottom of the tower, and may spread out across the lower level.

With the mancubus or two killed, turn left and go up the steps. Follow the ledge round, open the red door, and enter. Go up the lift immediately on the right, then cross the bridge to take the yellow skull key, then turn around, kill the monster that has teleported in at the start of the bridge, then press the switch that has appeared next to it. Now turn around and cross the bridge once more, as the pillar blocking the way will have moved, allowing you to drop down into the area overlooking the place where the mancubi were. Just off of this area is a small lava pool containing a soulsphere, which it is advisable to take. Follow the path round and go down the steps, and you will find arrive back in the tunnel connecting the start area and the tower. Watch out for revenants attacking from the right, if you have not yet had a chance to kill them. Open the yellow bars and go up the steps. You will find yourself in an overground area near the tower. Head into the ruins, and once you have cleared the revenants, press the switch. Leave the ruins and slowly drop down into the tunnel marked by a trail of candles leading up to it. If you don't go too quickly, you will get the blue skull key. If not, you will have to go back up to the top of the tunnel and try again.

Go back up the steps past the yellow bars and now turn right at the top of the steps and go along the red path towards the blue bars. Open the bars, and press the switch inside. This will raise a ledge allowing you to reach the exit, which is attached to the side of the tower. However, the switch also springs a trap behind you, containing a revenant on ITYTD and HNTR, or otherwise, an arch-vile. The ledge you need to exit is marked by a green armor and is visible from the blue bars, so you can find it easily. You will need to use straferun to get from the ledge to the exit hole.

* The vertex count without the effect of node building is 2944.