MAP04: A Good Flying Bird is the fourth level of the first episode of Back to Saturn X. It was designed by Sarah Mancuso (esselfortium), who also composed the level's music track, "Clonk". The par time is 3:00. In the official add-on version, this level's name is Conceptual Birdbath. 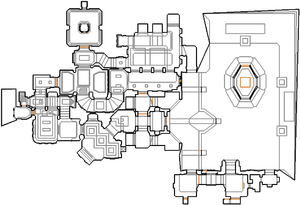 Map of A Good Flying Bird
Letters in italics refer to marked spots on the map. Sector, thing, and linedef numbers in boldface are secrets which count toward the end-of-level tally.

Head straight forward up some steps to a room overlooked by imps and one or two mancubi, then go through the doorway on the opposite side and turn the corner to get outside - the yellow keycard is on a pedestal guarded by an arachnotron and revenants, but you cannot reach it from here. Take the super shotgun under the pedestal then continue forward to another doorway and kill some zombiemen and demons blocking your way forward, then go down some steps and turn left to get to a courtyard with another arachnotron as well as more zombiemen and imps. Climb the steps around the structure in this room to get inside it and find the red keycard (plus a rocket launcher on Hurt Me Plenty (HMP) skill level or lower) - taking the key will release a number of cacodemons into the courtyard.

Go back to the starting point (pushing past an arch-vile on HMP or higher) and walk south to find a chaingun guarded by a couple of zombiemen, then climb the curved staircase ahead to get an armor. Go east into the next room and press the "LOCK" panel at the opposite end to reveal a button that will open a door behind you, then go through this door and run up the steps on your left to leap through a window and land on the pedestal holding the yellow key. Open the locked door opposite the pedestal and kill a chaingunner waiting behind it, then flip the switch here to lower the nearby wall and reveal a few imps. Step through and enter an alcove containing some clips (plus a supercharge on HMP or lower); the floor will lower you into a room where imps, a baron of Hell and one or two revenants are protecting the blue keycard, which is recessed into the east wall.

Head west into the next room to dispose of an arachnotron, then climb three sets of steps to find a revenant guarding a blue key door. Open it and turn left to go back to the starting point where you will see another locked door. Open it and kill any imps and chaingunners you can see, then step round the central column to find an arch-vile guarding a button - pressing the button will open the bars behind you, letting you reach the exit switch.

* The vertex count without the effect of node building is 2053.