MAP04: BROWN1 sucks is the fourth map of 32 in 24, a deathmatch megawad. It was designed by Devin Acker (Revenant).

This was the sixth submission to the project, arriving just before the session passed the four hour mark. According to the author, it took 35 minutes to build, with another 20 minutes "nitpicking over useless crap." The map is named after the BROWN1 texture, which is used as the only texture for virtually the entirety of the building seen in the map. 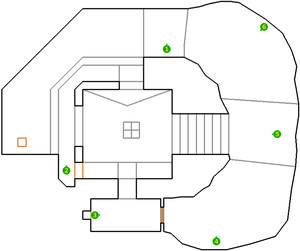 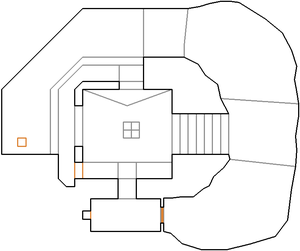 BROWN1 sucks is a dimly lit map featuring a grey cave containing a large body of water to the east, a small building to the south and centre of the map, and an outdoor grassy area to the north-west which is linked to the southernmost part of the building by a two-way teleporter. All players will spawn with the super shotgun, but additional items are available. That southernmost room contains a green armor, and a chaingun can be found on the stairs leading out of it. The cave is very large and so can be accessed from any part of the map, either by going through the door from the southern room, down the stairs from the centre, or jumping off the ledge at the north of the map. The rock path that crosses the centre of the cave holds the plasma gun. The centre of the map is the larger part of the building, and the rocket launcher can be found here. The BFG9000 is tucked away up in a corner, and is retrieved by taking the lift on the western exterior of the building, and straferunning across the gap.

Ammo for the rocket launcher can be found only in the cave, the ammo for the BFG and plasma gun can only be found in the central room, and shotgun ammo is limited to just two sets of shotgun shells next to the southern teleporter. There are no power-ups in the map.

* The vertex count without the effect of node building is 131.