MAP04: Bad Medicine Men is the fourth map of Ancient Aliens. It was designed by Paul DeBruyne (skillsaw) and uses the music track "Desk Lamp," composed by Stuart Rynn (stewboy). The par time is 2:45. 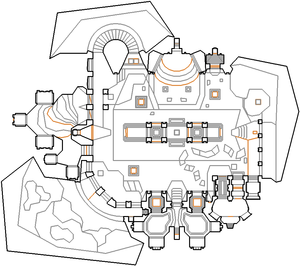 Map of Bad Medicine Men
Letters in italics refer to marked spots on the map. Sector, thing, and linedef numbers in boldface are secrets which count toward the end-of-level tally.

You'll start out flanked on both sides by archviles on towers above you. Head straight ahead and up the stairs for some goodies, including a shotgun in the alcove to your left and a berserk in the opposite one on your right. You can grab the supercharge as well, but you'll get it later if you choose not to. Deal with the enemies here, dodging the archvile attacks. Head back down the stairs and over to the platform in the southwest corner for a security armor. Drop into the pit on the north end and fight off a couple of demons, all while dodging mancubi, imps, and the aforementioned archviles. Once the stairs raise, enter the teleporter in reach while grabbing the blue key. This will drop you back in the room with the supercharge.

With the blue key in hand, head to the blue door next to the southwest platform. In here, you'll deal with some more mancubi, imps, some spectres, and a couple of shotgunners. Press the switch in the western most closet to raise stairs to the balcony. Move up and around the stairs until you enter a teleporter. This will put you on a ledge directly in front of one of the archviles. Moving forward a bit will raise some barrels that will kill the archvile when shot. Run onto the platform and grab the yellow key.

The southeastern corner of the central area houses the yellow door. Open it, hit the switch, and fight off the two demons and a revenant in waiting. The platform will raise, and you can follow the ledge around the corner to a button in the wall. Pressing this will cause some rocks to appear, and you can use these to get to the other archvile. Stepping on the eastern wall will reveal another revenant, and reaching the top of the wall will reveal the barrels that can kill the other archvile. Grab the red key, deal with any stragglers (including more enemies that have teleported in), and use the red door in the northeast corner to exit the level.

* The vertex count without the effect of node building is 2985.